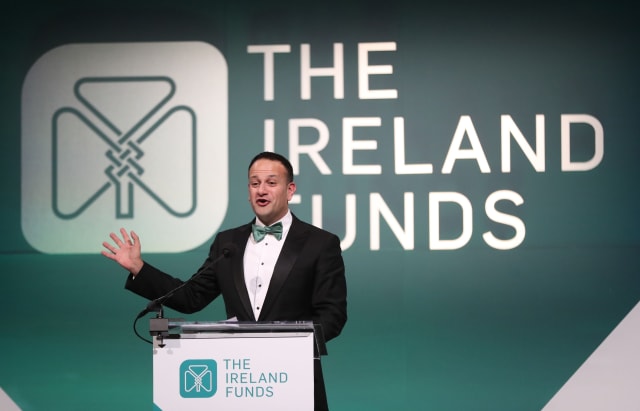 The Taoiseach added that his home country championed free speech and Irish people believed in free trade and free enterprise.

Mr Varadkar made the comments ahead of his bilateral meeting with President Trump in the White House on Thursday.

"American ideas and American values that spread around the world meant that a young boy growing up in Ireland, with an Indian father and an Irish mother, could dream of one day becoming the leader of his country, believing that the time would come when people would be judged on their principles and their ideals, on the content of their character and the quality of the work, and not on their sexuality or the colour of their skin," Mr Varadkar said.

The Taoiseach said these were Irish values today.

"We believe in equality before the law for all citizens, irrespective of gender, religion, race or sexual orientation," he said.

"We believe in free trade and free enterprise. "We champion free speech and freedom of association.
And we are proud to assert that democracy and multi-lateralism are the best way of solving the world's problems."

Mr Varadkar made the comments at the Ireland Funds Gala in Washington DC on Wednesday night, ahead of his meeting with Mr Trump.

The theme of this gala was the 20th anniversary of the Good Friday Agreement.

They enjoyed a performance by flute player Sir James Galway.

Mr Neal told the attendees that there should be no return to a hard border.

"[It] set us on a path towards lasting reconciliation," he said. "In the face of difficulties, we are resolute in our determination to protect all that has been achieved."

He added the influence and encouragement from the Irish in America would continue to be crucial in the coming period.

The Taoiseach will hold a bi-lateral meeting with Mr Trump at the White House. Other engagements on Thursday will include an annual lunch hosted by the Speaker of the House at Capitol Hill.

Mr Varadkar will use these opportunities to emphasise the strength of Irish-US relations and to highlight the case of the undocumented Irish.

In the afternoon, the traditional shamrock ceremony will take place as part of the White House Saint Patrick's Day Reception.

On Friday, the Taoiseach will be guest of honour at a breakfast hosted by Vice President Pence. He will then head to New York for the final leg of the week-long visit for St Patrick's Day.

It will conclude on Saturday, 17 March with the traditional New York Saint Patrick's Day programme, including a meeting with Mayor Bill de Blasio, the Saint Patrick's Cathedral mass and walking in the Fifth Avenue parade.