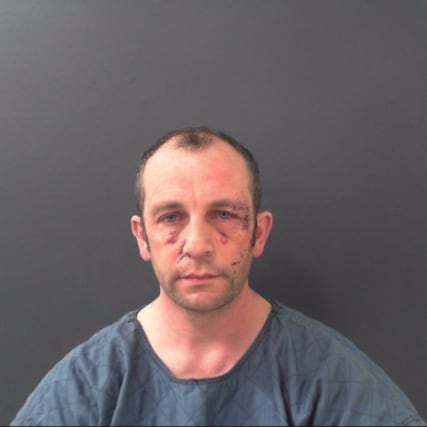 Neville Hord, 44, admitted the "cold-blooded public execution" of Jodie Willsher, 30, at the Aldi supermarket where she worked in Skipton just before Christmas.

He murdered Mrs Willsher in revenge after her mother, Nicole Dinsdale, told police weeks earlier that Hord had attacked her.

Hord apparently blamed his victim for the break up of his relationship with her mother.

Prosecutor Peter Moulson QC told Bradford Crown Court that Hord stabbed mother of one Mrs Willsher several times before he was stopped and restrained by members of the public.

He said it was a "cold-blooded public execution perpetrated for the purpose of revenge".

The prosecutor said the attack was witnessed by many people, including a child, as well as being caught on CCTV.

He said the attack was pre-planned and Hord, who had tracked his victim, also took an axe with him to the supermarket.

Describing him as "truly and horribly rotten to the core", the judge said: "You sentenced her, in your mind, to death."

The judge went on: "You chose a time and a place to, in effect, execute; to kill; to murder."

He said the killing was calculated to cause the "maximum pain, horror, shock and trauma".

In a statement read to the court, Ms Willsher's husband Malcolm, said his life and that of his daughter Megan, four, had been ripped apart.

He said mother and daughter had had an "unbreakable bond".

Mr Willsher said his daughter has told him: "I hate you daddy for not bringing mummy back."

He described how Megan had been looking forward to opening her Christmas presents with her mother and the family had a trip to Disneyland planned on Boxing Day.

Mr Willsher said: "I'm so scared he'll get out and do something to Megan."

But at Thursday's hearing, Judge Hall told Hord: "The high probability is that you will never be released from prison."

And he added: "Malcolm's fears for Megan perhaps can be laid to rest."

At an earlier hearing, Hord's family passed a statement to the media via his lawyers in which they expressed their "sincere condolences" to Mrs Willsher's family and added: "No words can convey our sorrow for this tragic turn of events."