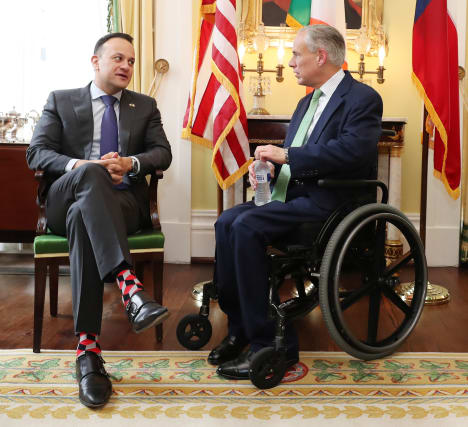 Irish premier Leo Varadkar has announced an extension of his country's consulate in Texas as part of plans to foster more links with a number of key US states.

The Taoiseach made the comments after a meeting with the Governor of Texas Greg Abbott in Austin on the first day of his St Patrick's Day visit to the US.

"We opened a consulate here for the first time in Austin three years ago - as part of my plan to double Ireland's footprint we're going to be expanding that mission."

The meeting was the first in the Taoiseach's week-long trip to the US for the annual St Patrick's Day festivities.

Other scheduled engagements in the Texan city on Sunday included a discussion about Irish innovation at the South By Southwest festival.

Mr Varadkar said there were about 100,000 people working for Irish companies in the US.

"I think that speaks to the developing and changing relationship between Ireland and America which is one that goes both ways in terms of investment, in terms of jobs and in terms of tech in particular," he said.

The Taoiseach said Ireland would be focusing on creating strong relationships with the states of Texas and California.

Mr Varadkar met the Republican governor and his wife Cecilia, who has Irish heritage. Her maiden name is Phelan.

Mr Abbott has been criticised by LGBT campaigners for his opposition to same sex marriage and his stance on a number of other social issues impacting the sector.

The Government's annual St Patrick's Day trip aims to advance Ireland's economic and political interests in the US. It also seeks to celebrate new and old cultural and communities ties between the two countries. This year it will incorporate four cities.

On Monday the Irish premier will meet the Governor of Oklahoma and will also visit a Native American community there.

His meeting with the Choctaw Nation will commemorate the tribe's fundraising efforts for the victims of Ireland's Great Famine in the mid 19th Century.

Mr Varadkar travels to Washington DC on Tuesday where he will deliver a foreign policy address to the Brookings Institution.

That evening, the Taoiseach and Senator George Mitchell will be keynote speakers at a congressional event to mark 20 years since the signing of Northern Ireland's Good Friday Agreement peace agreement.

His Washington engagements also include meetings with senior representatives of Irish companies succeeding in the US market.

On Wednesday, the Taoiseach will address the annual American Ireland Fund gala dinner.

Keeping with recent traditions, the focus of the itinerary will be Mr Varadkar's bilateral meeting with President Trump at the White House on Thursday.

It is likely to include a discussion on the issues faced by the tens of thousands of Irish citizens who live in the US without legal residency.

It will be followed by the annual Speaker's lunch on Capitol Hill and the ceremonial exchange of a shamrock bowl between Mr Trump and the Taoiseach back at the White House.

On Friday, the Taoiseach will be guest of honour at a breakfast hosted by Vice President Mike Pence.

Mr Varadkar will end his trip in New York where his series of engagements will include the St Patrick's Day parade along Fifth Avenue on Saturday.