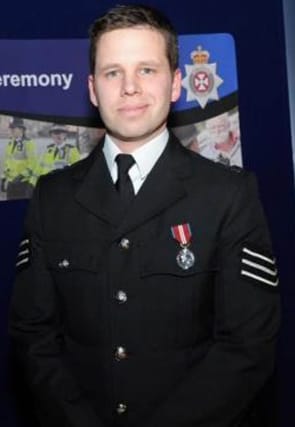 Police officers across the country have sent supportive messages to Detective Sergeant Nick Bailey as he recovers from exposure to a nerve agent.

The Wiltshire Police officer, who joined the force in 2002 and was commended in 2016 for his work on a serial rape investigation, is conscious in Salisbury District Hospital following the attempted murder of a Russian double agent and his daughter.

His chief constable Kier Pritchard hailed him as an "amazingly courageous" officer.

"He's well, he's sat up. He is not the Nick that I know but of course he's receiving a high level of treatment.

"Of course he's very anxious, he's very concerned. He did his very best on that night."

"He brought a really serious sex offender to justice."

The National Police Chiefs' Council said: "Sgt Nick Bailey and the emergency services first on the scene in Salisbury exemplify the values of public service. It is good to see the public support for them today."

His colleagues on the force, and others, also tweeted to wish him well.

Wiltshire Police Sergeant Louis McCoy said: "He's my friend, he's trending on twitter right now, big shout out to you mate. Let's get you fit and back!"

And Avon and Somerset Police said: "Wishing him a very speedy recovery."

Sue Mountstevens, Avon and Somerset Police and Crime Commissioner, said: "Sergeant Nick Bailey is an example of how emergency service staff really do go above and beyond their role for their communities. Our thoughts are with Nick's family & friends and we are wishing Nick a speedy recovery. "

Sam Sparkes, a roads policing officer, said: "Sending positive thoughts to @wiltshirepolice colleague Sgt Nick Bailey for a full and speedy recovery following the nerve agent attack. Sgt Bailey, you have the ENTIRE #PoliceFamily thinking of you & your family at this time."

On Thursday night neighbours in his village outside Salisbury described him as a "very nice guy" with a "lovely family".

"When I found out I get shocked and immediately worried for him and his family," said a 60-year-old neighbour, who did not want to be named.

"I hope he makes a full recovery and he and his family can move on from this."