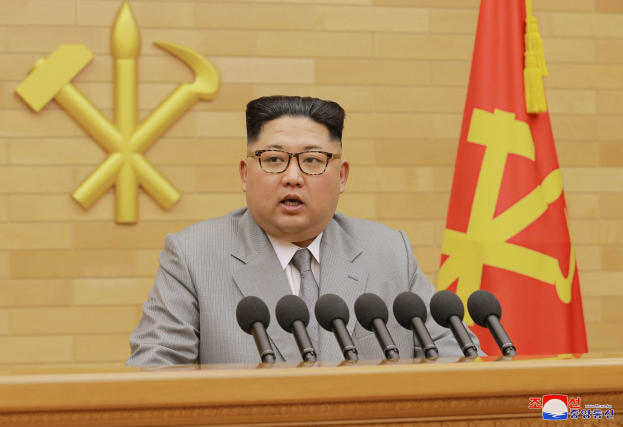 Plans for a meeting were announced by South Korean diplomats after a White House meeting with Mr Trump where they passed on a verbal message from Mr Kim, saying he was "committed to denuclearisation".

Mr Trump hailed "great progress" but said sanctions would remain in place. US secretary of state Rex Tillerson admitted the US was "surprised" by the overture and said it would take "some weeks" to arrange the meeting.

The face-to-face encounter between two men who until recently were insulting one another as a "dotard" and "Little Rocket Man" is slated to take place by May, but there is so far no indication of where it might be staged.

Responding to the developments, a Downing Street spokesman said: "The UK welcomes the South Korean announcement that Kim Jong Un has made a renewed commitment to denuclearise and will refrain from further nuclear missile tests while dialogue continues.

"We welcome the announcement of direct talks with President Trump by May and (South Korean) President Moon Jae-in in April.

"We have always been clear that we want Kim Jong Un to change path and put the welfare of his people ahead of the illegal pursuit of nuclear weapons.

"We will continue to work closely with the US, South Korea and the international community to ensure that pressure on North Korea continues and sanctions are strictly enforced until Kim Jong Un matches his words with concrete actions. We will continue to monitor developments closely."