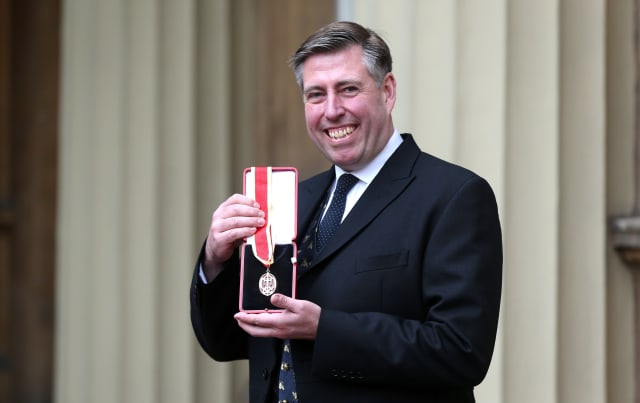 The chairman of the Conservatives' 1922 Committee has said "anyone who claims to know" how many MPs have requested a leadership election "doesn't".

Sir Graham Brady, regarded as the voice of the party's backbench MPs at Westminster, spoke after being knighted at Buckingham Palace on Tuesday.

The Altrincham and Sale West MP, who was elected chairman in 2010, would play a crucial role in any future leadership contest, which would be triggered if 15% of the party's MPs - 48 at present - write to him requesting one.

He told the Press Association: "I think it would be improper to do that (talk about how many letters he has received) and I think in order to fulfil that constitutional function within the Conservative party it's really important that whoever holds my job never says a word about it to anybody.

"I've managed that for nearly eight years now. Anybody who claims to know, doesn't."

Earlier this year there was speculation that Sir Graham was nearing the threshold of 48 which would trigger a leadership election, and that Prime Minister Theresa May could face being ousted by her own party.

Sir Graham said: "Fundamental to the role of the 1922 Committee, and in particular the chairman of it, is making sure the communications within the Conservative party and Parliament are as good as they can be, so making sure that the Prime Minister is in touch with the backbench opinion and vice versa is critically important to ensuring the smooth running of Government in what are complicated and difficult times."

When asked if he felt like that job was going well, he said: "I think we're doing a pretty good job, I think the Prime Minister's doing a very good job. I thought the speech she made on Friday was exactly correctly calibrated and we have a clear way forward."

Last week the Prime Minister set out her economic vision for Britain post-Brexit.

She repeated her "red lines" that the UK will leave the single market and customs union and the jurisdiction of the European Court of Justice, but she also spelt out greater details on the customs arrangements Britain wants to avoid a hard border on the island of Ireland.

Sir Graham, who was presented his award by the Duke of Cambridge, said of the ceremony: "He (William) asked... whether I was choosing to stand down at this point, and I said I wasn't."

The knighthood was one of a number of awards given to members of the Tory party in the New Year Honours, which saw claims of cronyism levelled at Mrs May.

Game of Thrones star James Cosmo, who was listed to collect his MBE for services to drama, was not present at Buckingham Palace because a work commitment.

His agent told the Press Association that he plans to attend at a later date, adding: "He is currently filming a project in Rome and sadly his filming schedule changed at the last minute which meant he was unable to attend today."