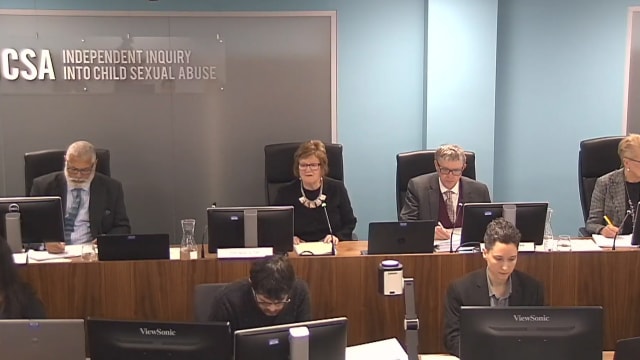 The Anglican Church cannot be trusted to "mark its own homework" when dealing with sexual abuse allegations and needs independent oversight, an inquiry has heard.

A separate body should ensure children are protected from predators in the Church of England, a lawyer for victims said, amid allegations offending was covered up by the clergy.

Richard Scorer was speaking on behalf of 21 victims of abuse within the church at the Independent Inquiry into Child Sexual Abuse.

Public hearings are taking place this week to examine how the religious order handled paedophilia allegations stretching back to the 1950s, first focusing on the Diocese of Chichester.

Such sexual abuse may have thrived in the Anglican Church due to an "excessive emphasis" on forgiving offenders in its ranks, the inquiry earlier heard.

Fiona Scolding QC, the lead lawyer for the Anglican strand of the inquiry, set out the potential problems that will be highlighted by witnesses and documents during the hearings.

She said evidence suggested young victims were often made to feel responsible for their experiences when they reported concerns to church staff.

Other issues included the church prioritising reputational concerns over the safety of children when allegations against the clergy came to light.

Mr Scorer said these could be tackled partly through a mandatory reporting policy for allegations or reasonable suspicion of misconduct in the church.

He hit out at the prioritisation of reputation over safety, borne from "the arrogance which equates the church with God", telling the inquiry: "It must be clear now that if you want to abuse children, there is no more effective way of terrifying and silencing your victims than to claim to have God on your side.

The Church of England has apologised to victims of abuse and accepted it had failed to protect children in the past.

The Archbishop of Canterbury Justin Welby said in a statement read to the inquiry by his counsel Nigel Giffin QC: "The failures that we have seen are deeply shaming and I personally find them a cause of horror and sadness.

"That children have been abused within the communities of the church is indeed shameful."

A spate of clerical child abuse convictions thrust the Diocese of Chichester into the public glare in the past decades, including the imprisonment of the former Bishop of Lewes Peter Ball.

Information about alleged offenders were not always passed on or investigated by the church authorities, the inquiry heard.

Mr Scorer told the panel that "radical solutions" were needed to quash cover-ups.

He said: "Nobody is suggesting that the day-to-day responsibility for safeguarding itself should be removed from the church.

"Day-to-day safeguarding clearly has to be owned by the church in order to be effective.

Addressing the panel leading the inquiry, he continued: "We say that the problems in the Church of England are too deeply rooted in its culture and structure for effective change to come from within.

"Survivors need you to step in and do what only you can do, which is to make the church properly accountable externally for these appalling scandals."

Ms Scolding said in her opening statement that evidence suggested that clerical figures suffered from an "inability" to spot grooming, believe holy men were capable of harming young people or understand those abused as children could suffer long-lasting damage.

She added there was "an excessive emphasis upon forgiveness, which allowed individuals to go without justice and for individuals who complained of abuse feeling isolated if they did not 'forgive' their abuser".

The Church of England for years lacked meaningful child protection measures, was beset by a "culture of amateurism" and was sluggish in responding to criticism, she told the inquiry.

The inquiry will continue on Tuesday at 10.30am.