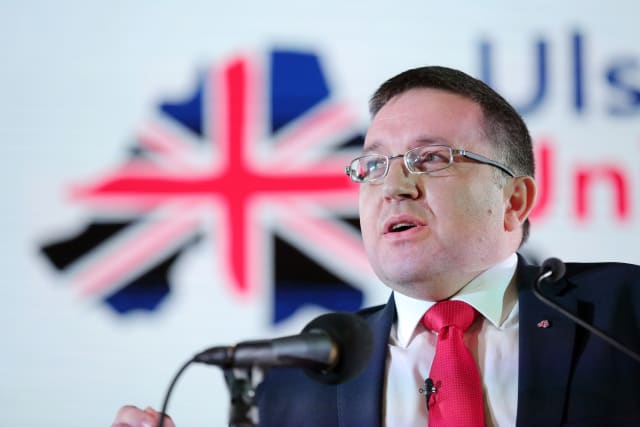 The principle of consent to constitutional change in Northern Ireland has been overlooked by the Irish Government, the Ulster Unionist Party leader said.

Robin Swann accused Taoiseach Leo Varadkar of "cherry picking" which elements of the 1998 Belfast Agreement he wanted to protect and raised concern about the growing polarisation of society.

The EU's draft Brexit withdrawal text included a backstop option for Northern Ireland to follow EU rules to avoid a hard Irish border - if an alternative arrangement is not agreed - creating potential divergence with the rest of the UK.

An Ulster Unionist letter to the Taoiseach said: "We are sure you will understand our frustration that it appears there is an amount of cherry picking going on when it comes to which elements of the Belfast Agreement must be protected at all costs.

"To unionists it seems that the principle of consent, the foundation stone of the agreement, appears to be overlooked."

The Good Friday Agreement affirms the legitimacy of the aspiration to a United Ireland while recognising the current wish of the majority in Northern Ireland to remain part of the UK.

The unionist letter said the vacuum created through the absence of devolved government in Northern Ireland, coupled with the ongoing negotiations on the UK's exit from the EU was escalating tensions.

Mr Varadkar has said he understands the sensitivities surrounding Brexit and the border issue for unionists.

He has said he does not want a hard border and it is up to the Brexiteers to outline how they will avoid that.

A letter to the Taoiseach signed by the Ulster Unionist leader, chairman Lord Reg Empey and MEP Jim Nicholson said: "Unionists of all shades value the principle of consent and as such recognise it is our democratic right to remain part of the United Kingdom and that cannot be dismissed or ignored."

Foreign Affairs Minister Simon Coveney has previously said the Irish Government had insisted on a backstop or default position in the absence of a better deal so far and was not trying to be provocative.