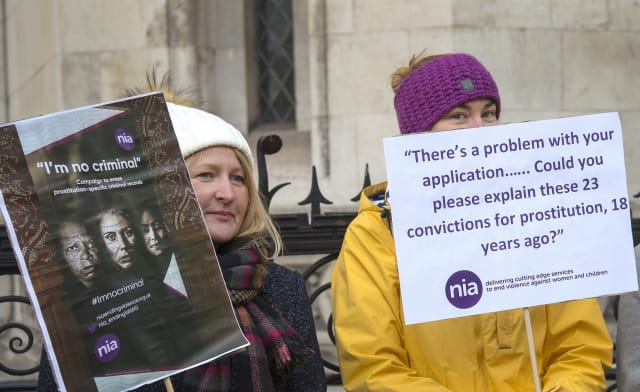 Three women who say they were "groomed, pimped and trafficked" into sex work have won a legal challenge against the Government.

Fiona Broadfoot and two other women, who cannot be named, brought a High Court action in a bid to prevent their criminal record being revealed to potential employers.

All three women were forced into sex work as teenagers and each have multiple convictions for soliciting or loitering under the Street Offences Act.

Two senior judges ruled on Wednesday that the law forcing them to reveal their past convictions was unlawful and "not necessary in a democratic society".

Mr Justice Holroyde, sitting with Mrs Justice Nicola Davies, said: "We accept that the claimants have all suffered a handicap in the labour market, and have suffered embarrassment and humiliation, because of the operation of the multiple conviction rule.

"In our view, it should be and is possible for Parliament to devise a scheme which more fairly balances the public interest with the rights of an individual applicant for employment in relevant areas of work."

The judges dismissed another six claims brought by the women, including arguments that the law amounted to gender discrimination and breach of privacy.

Mr Justice Holroyde said it was "greatly to their credit" that each of the women had succeeded in removing themselves from prostitution many years ago.

He added: "I have no difficulty in accepting that all three claimants have, even as adults, been victims in many other ways."

Speaking after the ruling, Ms Broadfoot said: "Finally, I feel like a weight has been lifted off my shoulders - it's a vindication.

"I have carried these convictions around - eight pages of them - all my life and it's a disgrace.

"Not one of those men who bought and used and abused me - even the ones who knew fine well I was a child when first put on the streets - has ever had to face the consequences of his actions.

Ms Broadfoot, who waived her right to anonymity and has campaigned for 20 years to prevent women in her situation having to disclose past convictions, added: "It has been a long fight but worth it."

Lawyers for the women said the ruling should result in their records, and those of others like them, being filtered to remove the soliciting offences.

Their solicitor Harriet Wistrich said: "This is an important judgment - although there were only three claimants in this case, the judgment will benefit all women in these circumstances and has the potential to bring about real change for sex trade survivors who should never have been criminalised in the first place.

"It is not easy for women with a history of prostitution to come forward and advocate for themselves and others - so much stigma attends them - so the courage and determination of these women is to be applauded."

Ms Wistrich said the women will seek permission to appeal in relation to some of their unsuccessful grounds of challenge.