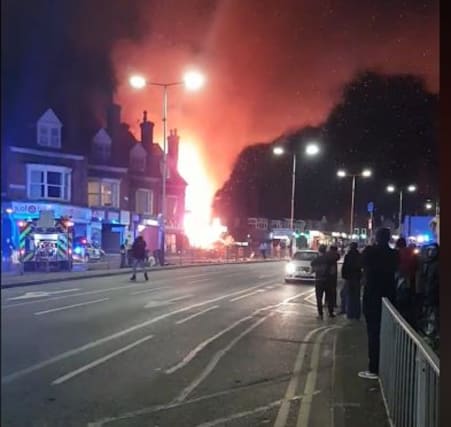 Three men have been arrested on suspicion of manslaughter following a deadly blast in Leicester.

Leicestershire Police said the men, all in their 30s, were arrested by officers on Wednesday evening, and were being questioned by detectives.

Those in custody are from the East Midlands, East Anglia, and the North West, according to the force.

The arrests are in connection with the investigation into a huge blast in Hinckley Road which demolished a supermarket and the two storey flat above, killing five people on Sunday night.

Human remains were recovered from the rubble which threw debris across four lanes of traffic and sparked a large fire.

Still officially listed among the missing are Mary Ragoobeer, 46, and her sons Shane, 18, and Sean, 17.

Formal identification of remains recovered from the wreckage have yet to be formally identified.

In a statement following the arrests, the force said: "No further details will be released about these individuals at this stage.

"We acknowledge that the terrible events of Sunday night in Hinckley Road have attracted significant public, political and media interest.

"However, in the interests of the ongoing investigation, and out of respect for the families of those missing feared dead, and those who were injured in the explosion and fire, we request that the media and public resist speculating about the identities of those arrested, the circumstances that may have led to their arrest and the cause of the explosion.

"Whilst we will not disclose further details at this stage, we stress that there remains no evidence that the events of Sunday night are in any way terrorist-related."

The latest development came as tributes were paid to volunteer Ms Reek, who was praised for her "passion", " bubbly personality and sense of humour" by the Loros Hospice.

The organisation, which serves Leicestershire and Rutland, confirmed she had recently been nominated for the Lord-Lieutenant's Young Volunteer of the Year award for her work.

The statement read: "It is with great sadness to hear that Leah Reek is one of those missing following the incident.

"Leah had been volunteering at Loros since September 2017, as part of our Day Therapy Team and was known for her bubbly personality and sense of humour.

"She worked hard and her passion for committing to pursue a career in the health sector was clear, with the patients' needs always at the forefront of her work.

"She will be greatly missed by all of her colleagues at Loros. Our thoughts are with her family and friends at this extremely sad time."

The principal of Long Field Academy in Melton, Ms Reek's former school, said she was "an incredibly friendly, proactive and bubbly character who was really popular amongst her peers and staff alike".

Chris Haggett added: "She will be fondly remembered and we send our heartfelt condolences to her family and friends at this incredibly tragic time."

Prayers have been said for all those affected by the tragedy at English Martyrs' Catholic School, where Sean Ragoobeer was a sixth form student.

Mother-of-three Ms Ragoobeer, whose other son 15-year-old Scotty was among the wounded, worked at the King Richard III Visitor Centre in Leicester.

Iain Gordon, visitor centre director, said:  "We are all deeply shocked and saddened by this terrible tragedy and our thoughts and prayers are with her husband and family at this very difficult time."