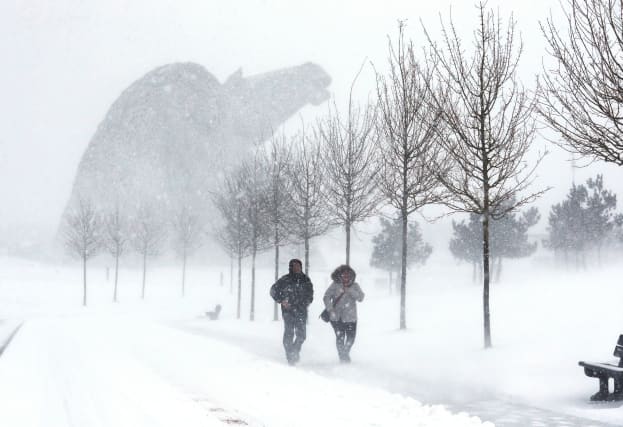 The highest level of alert has been issued for heavy snow in parts of Scotland as the extreme weather continues to batter the country.

The Met Office warning - covering central Scotland, Tayside and Fife - means severe conditions are expected in those areas between 3pm on Wednesday and 10am on Thursday.

The definition of a red warning is that "you should take action now to keep yourself and others safe from the impact of the weather" and it cautions widespread damage, disruption and risk to life is likely.

The Met Office stated: "Heavy snow showers and drifting of lying snow in the strong easterly winds will become more widespread across the area later on Wednesday afternoon, through the evening and overnight into Thursday.

"Roads will become blocked by deep snow, with many stranded vehicles and passengers. Long delays and cancellations on bus, rail and air travel are expected. Some communities could become cut off for several days. Long interruptions to power supplies and other services."

It comes as hundreds of schools were closed and there was significant disruption on the road and rail network as a result of heavy snow in Scotland on Wednesday.

Police are urging people not to travel in the red and amber weather warning areas, which together cover much of the country.

The weather has led to the closure of the train route between Carlisle and Scotland, with other rail routes between England and Scotland also badly disrupted.

In addition to schools, some universities and nurseries have also been forced to close.

A number of football fixtures have also been postponed.

On the roads, a lorry came off the A90 at Stonehaven in Aberdeenshire and there have been several accidents elsewhere.

Part of the M74 northbound was closed due to "a number of vehicles losing traction", although it was later reopened, Traffic Scotland said.

The Forth Road Bridge is closed while high winds and wintry showers are making driving conditions difficult on the Tay Road Bridge.

The A93 is shut at Braemar, while some B roads in the Banchory area are closed, as are the snow gates at Tomintoul.

Virgin Trains said the route between Carlisle and Scotland is closed, with no trains or replacement buses running.

Other rail routes between England and Scotland are also "severely disrupted".

ScotRail advised customers on Wednesday morning not to travel in the Strathclyde area of the country due to the weather conditions.

The operator warned on its website: "Train services running across the whole ScotRail network will be cancelled, delayed or revised. Disruption is expected until the end of the day."

Pupils across the country are having a "snow day" with all schools shut in the East Dunbartonshire Council, City of Edinburgh Council, Falkirk Council, Fife Council, Scottish Borders Council, Stirling Council, and East Renfrewshire Council areas.

Glasgow City Council and Renfrewshire Council have closed all schools and nurseries for the day due to the weather, while West Lothian Council has also shut all schools.

In Aberdeenshire more than 120 schools are shut, while the University of Glasgow and Glasgow School of Art (both its Glasgow and Highlands and Islands campuses) are also closed due to the weather.

In the Highlands, there are at least 47 schools and 25 nurseries closed across the council area.

The universities closed include Glasgow, Stirling and Strathclyde.

In addition to the red warning areas, the Met Office warnings for snow are cover many areas including Central, Tayside, Fife, Grampian, Highlands, Western Isles and Strathclyde.

Met Office meteorologist Aidan McGivern said maximum temperatures on Wednesday would be barely above freezing, feel more like minus 10C (14F)once the wind chill factor is taken into account.