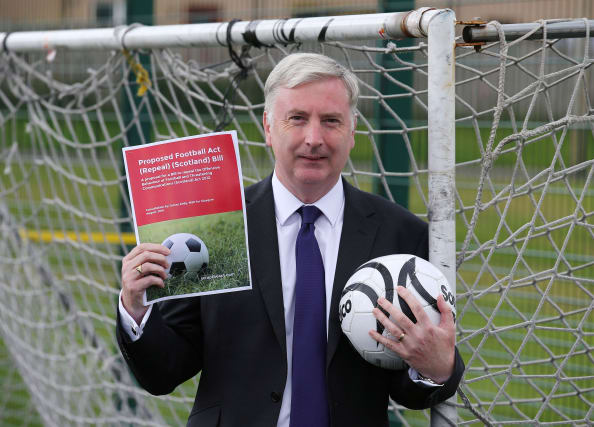 A repeal of controversial legislation to tackle sectarianism at football is expected to move a step forward later.

MSPs on Holyrood's Justice Committee are likely to endorse a bill by Labour's James Kelly to scrap the Offensive Behaviour at Football and Threatening Communications (Scotland) Act.

The committee vote on Tuesday marks stage two of the political process and follows MSPs from opposition parties banding together to defeat the government in a vote supporting the general principles of the legislation to repeal last month.

Mr Kelly said: "The SNP was wrong to use its previous parliamentary majority to bulldoze the Football Act through in the first place - however we are now getting closer to repealing the law.

"Parliament has repeatedly backed repeal of the Football Act and legal experts have already made clear that there will be no gap left by repeal.

"The SNP should get behind every other party on this issue, scrap the act, and start investing in anti-sectarianism projects, rather than clinging on to its broken law."

Following the committee stage, the bill will go before all MSPs for a final vote.

The SNP had used its majority in the last parliament to introduce the Act in the face of opposition from all other parties.

Since being implemented it has faced criticism from football fans and the legal profession.

A Scottish Government spokesman said: "The vast majority of football supporters are well-behaved and research from a YouGov poll also shows that 83% of respondents support laws to tackle offensive behaviour at football matches.

"The Act makes it clear that no section of society is exempt from standards and behaviours that are considered acceptable everywhere else.

"Repealing section six creates a legal gap by removing protection from religious communities as highlighted by equality and victims groups.

"We believe this is a backward step as the ability of police and prosecutors to charge people for unacceptable behaviour will be compromised. This could lead to minority communities feeling vulnerable and exposed to abuse."