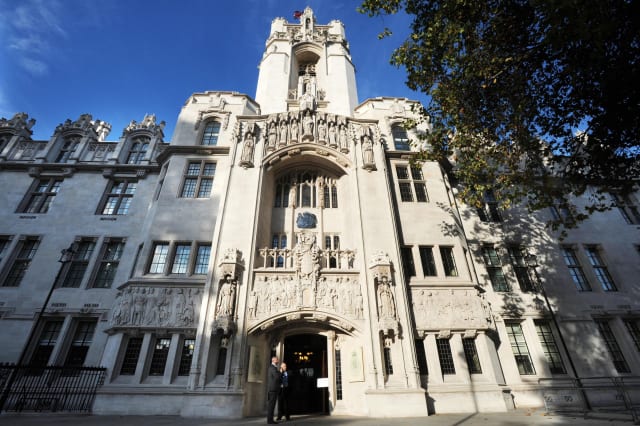 A ruling that a man with an extensive brain injury should be allowed to die without his family going before a judge is under scrutiny by the UK's highest court.

From June 2017, the 52-year-old financial analyst, who can be identified only as Mr Y, was in a prolonged disorder of consciousness (PDOC) after suffering a cardiac arrest as a result of coronary artery disease.

Experts agreed it was highly improbable that Mr Y would re-emerge into consciousness and - even if he did - he would have profound cognitive and physical disability and always be dependent on others.

Mr Y had not drawn up any advance decision to refuse treatment but his family were firmly of the view that he would not want to be kept alive given the poor prognosis.

His family and medical team agreed it would be in his best interests for clinically assisted nutrition and hydration (CANH) to be withdrawn, with the result that he would die within two to three weeks.

In November, High Court judge Mrs Justice O'Farrell granted a declaration that it was not mandatory to bring before the court the withdrawal of CANH from Mr Y in circumstances where there was no dispute between his relatives and specialists.

She gave permission for an appeal by the Official Solicitor - who represents people who lack capacity - and CANH was provided in the meantime, but Mr Y died in December.

It was decided that the appeal before five Supreme Court justices, led by Lady Hale, should proceed despite Mr Y's death.

On Monday, Richard Gordon QC, for the Official Solicitor, said that the central issue was whether the obtaining of an order from the Court of Protection, before CANH could lawfully be withdrawn from a person in a PDOC, was unnecessary where treating clinicians and the family agreed it was not in the patient's best interests.

He added: "This case is not about whether it is in the best interests of a patient to have CANH withdrawn. It is about who decides that question."

Although the Official Solicitor accepts there is no statutory requirement to bring such cases to court, he argues that the common law or human rights law require that every case involving the withdrawal of CANH be the subject of a best interests application regardless of whether there is a dispute.

The appeal, which is due to go into Tuesday with judgment reserved, is contested by the NHS trust which cared for Mr Y and Mr Y's wife.

The court will also receive submissions from the Intensive Care Society and Faculty of Intensive Care Medicine, the British Medical Association and the Care Not Killing Alliance.