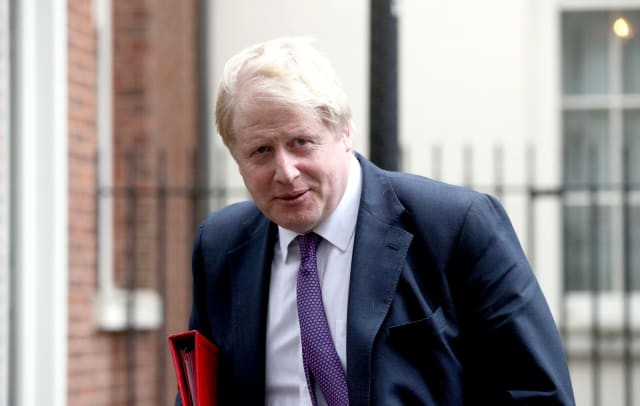 Boris Johnson has said he hopes the west "does not stand idly by" if incontrovertible evidence comes forward of further chemical weapons use in Syria.

The Foreign Secretary spoke of Britain's "failure" to take action in 2013, when MPs rejected military action against Syria's President Assad.

It came as Labour MP John Woodcock said the bodies of the latest violence in Syria "should be piled up in this chamber" as he urged ministers to do more.

Eastern Ghouta, a suburb of the capital Damascus, has been under intensive bombardment by government forces, backed by Russia, for weeks.

UN chief Antonio Guterres has denounced the violence in the embattled region, describing it as "hell on Earth".

Answering an urgent question in the Commons from Mr Woodcock, Mr Johnson was asked by Tory MP Jack Lopresti about the use of chemical weapons in Syria and the possibility of limited strikes on the Assad regime.

The Foreign Secretary said: "I think that many people in this country will certainly share his sentiments and I think many people believe that the United States of America did exactly the right thing when they responded to the abomination of the attack at Khan Sheikhoun in April with the strike at the Shayrat airfield.

"I think that it is certainly the case that if the OPCW (Organisation for the Prohibition of Chemical Weapons) produces incontrovertible evidence of further use of chemical weapons by the Assad regime or their supporters, then I will certainly hope very much that the west does not stand idly by."

The latest round of violence has been marred by fresh reports of chlorine gas use, as well as indiscriminate bombing and the targeting of hospitals.

"The men and women of Ghouta who lie in pieces, deliberately targeted by Assad's Russia enabled bombs, the dead children whose faces are altered by the chlorine gas that choked them," Mr Woodcock said.

"They should not be strewn in the rubble of Eastern Ghouta. Those bodies should be piled up in this chamber and lain at the feet of governments of every single nation which continues to shrug in the face of this horror."

He added that the UN Security Council "is broken while one of its permanent members flouts the basic laws and systems of order it was created to uphold".

Mr Woodcock said: "In these dreadful circumstances, being cowed into inaction by this strangulated body is a greater violation than seeking to act even without its own authorisation."

Mr Johnson, in response to the Labour MP for Barrow and Furness, said: "On his central point, which is that we in this country, the West, in the end did not do enough to turn the tide in Syria, that we missed our opportunity in 2013, no one can conceivably contradict him.

"I think that we all understand what took place in the gap that we allowed to be opened up for the Russians and the Iranians to come in and to support the Assad regime.

"We all understand the failure that took place then."

Mr Johnson went on to say that he believed it was "almost impossible" for the Syrian regime to now achieve a military victory.

"The only way out of this mess, this morass, for the Russians is to go for a political solution," he added.