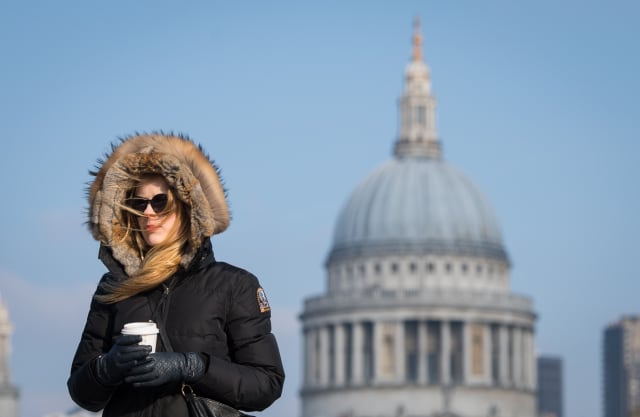 Some parts of the UK are set to feel colder than places in the Arctic Circle as the freezing temperatures continue into the week.

Widespread snow is forecast, and the Met Office has issued yellow weather warnings for Monday, Tuesday and Wednesday.

By the middle of the week, the majority of Britain is being warned of the potential for delays on the roads, trains and in the air.

The alert also warns there may be some power cuts and loss of mobile phone signal.

The Met Office said that by the end of Wednesday, more than 20cm of snow may have accumulated in some parts of eastern England, Scotland and Northern Ireland.

Met Office meteorologist Charlie Powell said: "The UK is on track for some really cold weather this week. It's not going to be record-breaking, but it'll be pretty exceptional - winds are going to make it feel minus 10C (14F) to minus 15C (5F) during the day.

"We will see the first signs of that tonight in the shape of snow showers working all the way down the east coast.

"That continues into Monday, with snow showers moving across the country during the day before reaching Wales.

"Winds are then going to strengthen and we could see some easterly gales through the eastern Channel and east Anglia by the middle of the week.

"That's going to make it feel really cold, daytime temperatures on Wednesday and Thursday will be struggling to get above freezing for most of the country."

He added: "By Thursday evening, there are growing signs there could be some significant snowfall across southern England.

"Unusually for Britain, the snow is going to be quite dry, so it will blow around and gather in drifts and we could see some blizzard conditions.

"We don't want to scare people, but people should make sure they are prepared for some seriously cold weather."

Lows of -5C (23F) recorded over the weekend marked the lowest temperature in the week leading up to March 1, the first day of spring, since 1986.

The wind chill, which could see parts of the UK feeling as cold as -15C (5F), rivals the temperatures forecast for parts of northern Norway and Iceland.