In Pictures: The Queen is on trend at London Fashion Week 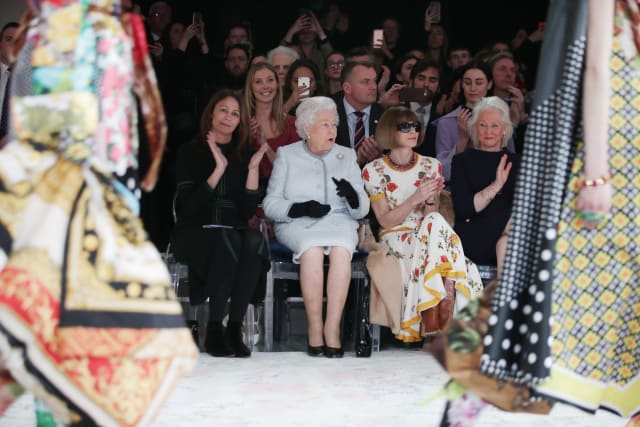 The Queen joined style royalty on the front row of London Fashion Week on Tuesday before she presented a designer with an award.

The inaugural Queen Elizabeth II Award for British Design, which was created to recognise the role the fashion industry plays in society and diplomacy, will be awarded annually to an emerging British fashion designer who shows exceptional talent and originality.

For the past two years, Angela Kelly, personal adviser to the Queen, has been working on designing an award which the Queen wanted to give in recognition of emerging British fashion talent.

Inspired by the Queen Elizabeth rose, the award has been hand-produced by Lucy Price at Bauhinia Studios in Birmingham's jewellery quarter.

The award aims to provide continuing recognition of the cultural and trade role the British design and fashion industry has played throughout the Queen's reign.

Taking to the catwalk to address the audience, the Queen said: "It is a great pleasure to be here at London Fashion Week today.

"From the tweed of the Hebrides to Nottingham lace, and of course Carnaby Street, our fashion industry has been renowned for outstanding craftsmanship for many years, and continues to produce world-class textiles and cutting edge, practical designs.

"As a tribute to the industry, and as my legacy to all those who have contributed to British fashion, I would like to present this award for new, young talent.

"I would like to thank the British Fashion Council for selecting the first winner - Richard Quinn."

Caroline Rush, chief executive of the British Fashion Council (BFC), also addressed the audience from the runway, saying: "Throughout your reign you have embraced fashion, using its power of diplomacy to communicate understanding between cultures and nations.

"Having visited the exhibition of your wardrobe at Buckingham Palace, we learnt that you had to challenge some of the norms, some of the dress codes that had been designed for men, making us in awe of how you have reflected the changes in our society.

"As our monarch you have worked with incredible designers, highlighted great crafts associated with our industry such as millinery, textiles and embroidery.
"Your Majesty, I know that you do not wish to be known as a fashion icon, but for all of us in this room, who have the utmost respect for you, and also for the hard work, diligence, cultural impact of our industry, we know that you undoubtedly are."

The Queen sat on the front row of the Richard Quinn runway show at London Fashion Week, next to Vogue editor-in-chief Anna Wintour.

The Queen, 91, was given a tour of the showrooms by Ms Rush to meet designers.