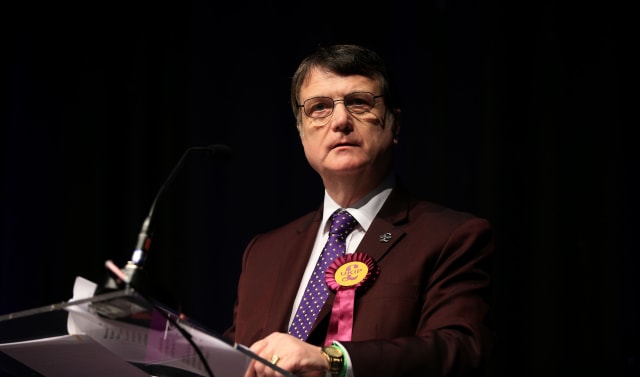 Acting Ukip leader Gerard Batten has defended his description of Islam as a "death cult" and claimed a "significant minority" of Muslims are extremists who want to be martyred.

London MEP Mr Batten, who took over at the head of the crisis-hit party after Henry Bolton was ousted on Saturday, said Islam "glorifies death".

He said Muslim migrants coming to the UK should reject the "dark age ideologies which many of them bring with them" through a literalist interpretation of the Koran.

On Sky News's Sunday With Niall Paterson Mr Batten did not rule out running for the party leadership on a permanent basis and insisted it still had a role to play on the national stage by making sure Brexit supporters were not "betrayed".

Defending his "death cult" comments, written in a blog shortly after the 2017 Westminster terror attack, Mr Batten said: "What I wrote there about Islam is factually and historically true.

"Anybody that cares to look at the history of Islam over the past 1,400 years will see that that is true."

He added: "It glorifies death. They believe in propagating their religion by killing other people and martyring themselves and going and getting their 72 virgins.

"But the trouble is they are justified in those beliefs by a literalist interpretation of their own so-called holy texts."

Mr Batten has called for Muslims to sign a "charter" rejecting extremism and has suggested no more mosques should be built in Britain until there is a place of non-Muslim worship in Mecca.

He told Sky News he wants Ukip to "adopt a policy that says no foreign money should be allowed to fund extremist mosques and imams -which is what we have allowed Saudi Arabia and Pakistan to do over decades".

He added: "They have exported their ideology to us and we have to think that we are powerless to do anything about it.

"I don't think we are and I think we should do something about it."

Former Ukip deputy chairwoman Suzanne Evans suggested she could launch a run for the leadership.

"I might very well, let's see," she told Sky News.

But she has also called for Nigel Farage to return to lead the party to clear up the "mess" he has created.