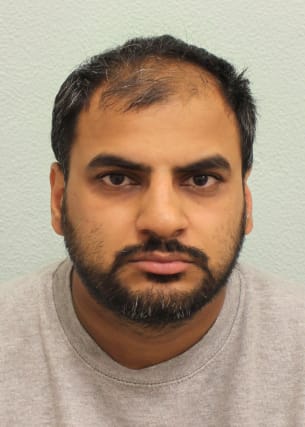 An "evil" builder has been jailed for at least 40 years for abducting, raping and cutting the throats of two young women, killing one and seriously injuring the other.

Mujahid Arshid, 33, hatched his murderous plot after becoming fixated with his 20-year-old niece, Celine Dookhran, and the surviving victim, who cannot be identified.

In July last year, he attacked them at a house he was renovating in Kingston, south-west London, and stuffed Ms Dookhran's body in a freezer.

Following a trial at the Old Bailey, Arshid was was found guilty of murder, attempted murder, rape of both women and their kidnap.

"The disgusting and senseless actions of Mujahid Arshid deprived Celine of a great future where she could go on to further her ambitions."

The killer was also convicted of sexually assaulting the surviving victim when she was 13.

As he was convicted after 14 hours of deliberations, Ms Dookhran's family shouted: "Yes".

Arshid ranted in the dock, saying: "(The survivor) killed all of them. She's lied to you."

The woman wept in court, but appealed for others to remain calm and hold back their emotions.

The judge dismissed as "absurd" his defence that the surviving woman was responsible for the killing.

In a victim statement, the woman said she and Ms Dookhran were "inseparable" friends.

She said: "On July 19 2017 that sick man took another even more depraved step in affecting my life.

"Hearing the helpless screams and seeing the fear in Celine's eyes that day. The terrifying visions and muffling sounds will never go away."

The court had heard that Arshid had a festering obsession with the surviving victim dating back to when she was a child.

When she complained about his sexual abuse, her family had not believed her, jurors heard.

Four years before the murder, Arshid revealed his rape fantasy involving the same woman in a web chat with an undercover police officer.

During their explicit exchanges, he said: "These kind of girls deserve rape - lol."

When confronted by police, Arshid blamed an employee for using his computer and the case was dropped.

Prosecutor Crispin Aylett QC told jurors that, after Ms Dookhran moved into Arshid's house, she also got "dragged into his warped yearnings".

The Barclays bank worker had confided in her boyfriend that she found him "creepy" and a "pervert".

In the weeks leading up to the killing, he carried out research on the internet and was inspired by acid bath killer John George Haigh, who was hanged in 1949 for murdering six people.

Arshid bought a freezer for the Kingston house to hide the bodies so they would not be found until long after he had fled the country.

He seized his opportunity when Ms Dookhran's family tried to force her to split from her boyfriend, leaving her "distraught".

He bound and gagged the women and bundled them into his pick-up truck the next day.

He raped both women in turn at the Kingston house before slashing Ms Dookhran's throat in the bathroom.

The second woman was badly injured but managed to escape by talking Arshid round.

Speaking to police from her hospital bed, she described hearing screams and thuds as Arshid killed Ms Dookhran while she was tied to a chair downstairs.

She told officers: "He said: 'Now you've got 10 minutes to live and your body will shut down.' I was trying to play dead.

"I sat up and he said: 'How have you got so much energy?' I was covered in blood from head to toe. I was swimming in it.

She told the court: "I'm not going to lie, I was scared for my life. I thought if we get out alive, he cannot get away with this."

Afterwards, Arshid had a furious WhatsApp row with his wife, Aisha Kalyansingh, who demanded to know where her niece was.

Arshid said he was running away and would be in touch when he reached Pakistan, but Ms Kalyansingh told him: "You're dead to me."

He was picked up at a hotel in Folkestone in Kent, still in possession of the padlock to the freezer.

Giving evidence, he claimed the surviving woman killed Ms Dookhran in a fit of jealousy after he had consensual sex with both of them.

But his account was at odds with the fact Ms Dookhran had a sock stuffed in her mouth and the knife that cut her throat had also sliced through tape wound around her head.

Tappu denied involvement in the kidnap.