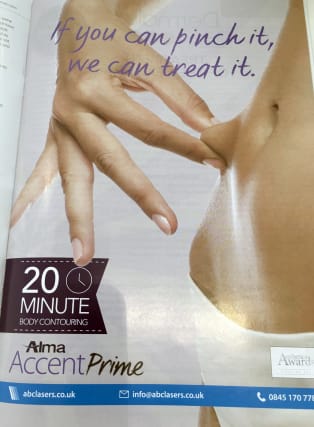 An advert for a body contouring treatment has been banned for suggesting that slim people would benefit from weight loss and trivialising the procedure.

The press ad for ABC Lasers, seen in Aesthetics Journal's September 2017 edition, showed the lower half of a woman wearing briefs and pinching some flesh from her stomach and text stating: "If you can pinch it, we can treat it."

Further text alongside the image of a clock stated: "20 minute body contouring."

A reader, who believed the ad implied that the model needed to undergo body contouring despite being slim, complained that it was irresponsible.

The Advertising Standards Authority (ASA) also challenged whether the "If you can pinch it, we can treat it" claim and the emphasis on speed trivialised the decision to undergo body contouring.

ABC Lasers said the ad would be changed before they published it again.

Aesthetics Journal said the publication was for healthcare professionals and other staff and industry representatives, and therefore would not put pressure on individuals to feel they needed to undergo body contouring.

The ASA said it was a concern if medical professionals passed on to consumers the impression that body contouring could benefit people who were slim or that the decision to undergo the procedure was one that could be made quickly.

It said: "We considered the photograph, which showed the model's pronounced hip bone and her briefs gaping away from her body because of the bone's prominence, suggested that she was particularly slim.

"We considered the image nevertheless suggested, because she was able to pinch flesh from her tummy between her thumb and forefinger, along with the text 'If you can pinch it, we can treat it', that she would still benefit from body contouring.

"We considered that the message that such slim people would benefit from weight loss treatment and the targeting of the ad towards those who were already slim was irresponsible."

It ruled that the ad must not appear again, adding: "We told ABC Lasers to ensure their ads did not suggest that particularly slim people could benefit from body contouring or that the decision to undergo body contouring was one that could be taken lightly."