Men sought in connection with 87-year-old's death after robbery 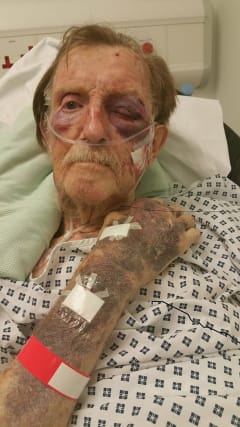 Officers investigating the death of an 87-year-old man who died after robbers smashed their way into his home have named two men they want to trace.

Arthur Gumbley was beaten to the floor and had jewellery stolen in a violent late-night attack at his Sutton Coldfield home, near Birmingham, on November 21.

He later died in hospital, on December 12.

Staffordshire Police have issued images of two men - Jimmy Michael Connors, 28, and Tom Joseph Ward, 17 - in a bid to discover their whereabouts.

A £10,000 reward has been offered by the charity Crimestoppers for information leading to the arrest and conviction of those responsible for frail Mr Gumbley's death.

Issuing details, detectives said Mr Connors was 5ft 5ins in height, of average build and had an Irish accent.

Ward, who occasionally lives in Stoke-on-Trent, is described as 5ft 8ins tall, is of average build, and also has an Irish accent.

Detective Inspector Dan Ison, the senior investigating officer, said: "Both men have links throughout the country and are known to frequent the London, Birmingham, Stoke-on-Trent and Yorkshire areas.

"It is imperative they are caught as soon as possible and help from the public is needed to track them down."

The force said both men are considered violent and urged the public not to approach them but instead call police.