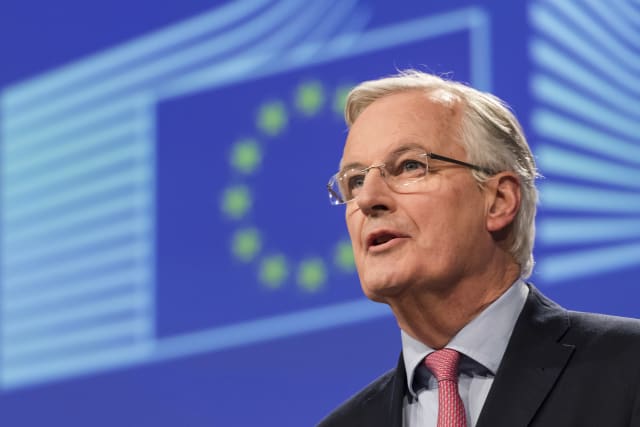 Agreement on a transition period to smooth Britain's exit from the EU is "not a given", Brussels' chief Brexit negotiator has warned.

After the latest round of talks between officials in Brussels, Michel Barnier said three "substantial" disagreements remain over the transition, expected to last around two years after withdrawal in March 2019.

Declaring himself "surprised" by the UK stance, Mr Barnier said Britain had to accept the "ineluctable consequences" of its own decision to quit the EU.

The atmosphere has soured since Brussels published a position paper which included a plan to restrict access to the single market if the UK fails to comply with the terms of the transition.

Brexit Secretary David Davis said it was "surprising" that Mr Barnier did not understand the UK's position and accused Brussels of having a "fundamental contradiction" in its approach to transition.

After the latest round of talks between officials in Brussels, Mr Barnier told reporters that stumbling blocks remained.

He said: "To be quite frank, if these disagreements persist, the transition is not a given. Time is short - very short - and we haven't a minute to lose if we want to succeed."

Mr Barnier also warned that checks at the border between Northern Ireland and the Republic will be "unavoidable" under Theresa May's plans for the UK to leave the single market and customs union.

He confirmed that Brussels is drawing up a legal definition of the regulatory alignment that must continue between Northern Ireland and the EU to avoid the creation of a hard border.

London had provided no proposals for the kind of technological fix which could get around this, he told a press conference in the Belgian capital.

The EU's publication of a position paper on the proposed transition deal provoked fury from Mr Davis, who branded the document "discourteous" and "unwise".

But Mr Barnier said he could not understand the "uproar" in London over the position paper.

"There is no wish whatsoever to punish," he said. "We are trying to draft an international agreement on a solid basis that can be effectively implemented."

Mr Barnier said it was clear that three "substantial" points of difference remain between the two sides' visions of how the proposed transition period would work, said Mr Barnier.

Disagreement also remained over references to European Court of Justice jurisdiction in the withdrawal agreement, which Brussels regards as essential for the deal to be "credible and sustainable", Mr Barnier said.

He added: "To be frank, I am surprised by these disagreements. The positions of the EU are very logical, I think.

"The UK wants to enjoy the advantages of the single market, the customs union and common policies. It has therefore to accept all the rules and the obligations until the end of the transition. That's very logical.

"It also has to accept the ineluctable consequences of its decision to leave the EU, to leave its institutions and its policies."

Unlike after previous negotiation rounds, Mr Davis did not travel to Brussels for a joint press conference with Mr Barnier.

Instead he responded in a statement claiming that Brussels was trying to "have it both ways" over the transition by setting up a dispute resolution mechanism but dismissing a UK push for safeguards.

"Given the intense work that has taken place this week it is surprising to hear that Michel Barnier is unclear on the UK's position in relation to the implementation period," he said.

The UK was seeking a "time-limited period that maintains access to each other's markets on existing terms".

He said that "for any such period to work, both sides will need a way to resolve disputes in the unlikely event that they occur".

"But there is a fundamental contradiction in the approach the Commission is taking.

"Today they acknowledged that a way to resolve disputes and infringements is needed. Yet at the same time they dismissed the UK's push for reasonable safeguards to ensure our interests are protected. It is not possible to have it both ways."

He said the UK wanted to stay "the closest of friends and allies" with the EU and "it is in that spirit that the UK continues to approach negotiations with the commission".