Sandie Shaw 'quite thrilled' to receive MBE from Charles 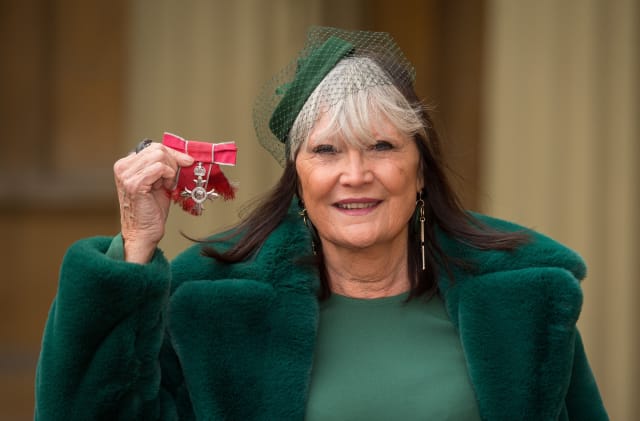 Singer Sandie Shaw said she was thrilled to be honoured at Buckingham Palace, adding that there had been a failure in the past to recognise women in music.

The Swinging Sixties star said the Prince of Wales seemed "stunned" that the 70-year-old was only now being given an award.

Shaw, who scored Britain's first Eurovision Song Contest win in 1967 with her hit Puppet On A String, said she felt she was in great company, as she and fellow songstress Emeli Sande collected MBEs in recognition of their services to music.

Following her conversation with Charles, she said: "He was a bit stunned it had taken so long.

"He said 'Why? Why has it taken so long for you to get here?'

"I told him the truth - the truth is that women in music haven't tended to be honoured in the past, certainly not in the '60s."

Asked if Charles had agreed with her, she replied: "I wouldn't like to say."

She added: "He said he was glad I was here now."

Shaw, who said she felt "quite thrilled" about her honour, achieved three UK number one singles in her career and was known for performing barefoot.

The Eurovision winner revealed she does not take much interest in the singing contest - admitting she never watches it.

Asked if she had seen SuRie's track Storm being chosen on Wednesday night to represent the UK at this year's event, she said: "No, I watched Silent Witness."

Sande, who was born in Sunderland to Zambian father Joel Sande and English mother Diane Sande, has had a string of hits including two UK number one singles.

The 30-year-old Next To Me musician, from Alford, Aberdeenshire, was named Brit Awards Critics' Choice winner for 2012 and in the same year performed at the opening ceremony of the Olympic Games in London.

Speaking after the ceremony at the Palace, she said: "It feels very exciting, a big honour. And especially because I get to experience the whole day with my family.

"So we've all been on such a big journey together. Being here is so much to do with their sacrifices as well as mine so it was a great treat for all of us."

MPs eligible for £10,000 grant from councils over constituency office closures

The PM will need to rest as he recovers from Covid-19, says his father

Why the '5G conspiracy' is harmful (and making some people money)

Brexit briefing: 265 days until the end of the transition period