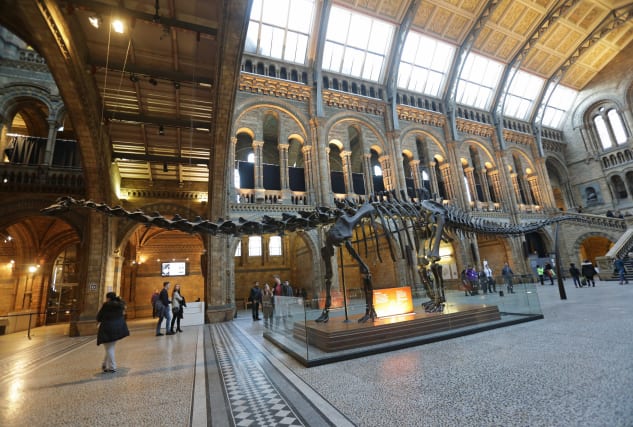 A huge dinosaur skeleton will begin its tour of the UK today when it is unveiled in a museum on the Jurassic Coast.

The 26-metre centrepiece had been on display since 1905 in the Natural History Museum in London, most recently in the Hintze Hall in the museum's entrance from 1979 to 2017.

It has not before been publicly displayed outside the museum.

The skeleton is a cast made in the early 1900s from an original in Pennsylvania, USA.

It is an example of the Diplodocus carnegii species, which lived between 145 and 156 million years ago.

The species is named after Andrew Carnegie, a 19th-century industrialist and philanthropist who donated the cast to the Natural History Museum.

It took three weeks to dismantle the 292 bones, which are made of resin and plaster of Paris.

In place of the dinosaur, a blue whale skeleton is now displayed in the Hintze Hall.

The three-year tour begins at the Dorset County Museum in Dorchester, Dorset, on the Jurassic Coast, famed for its fossils.

The exhibit will be open to the public from Saturday, with some events for press on Friday.

It will then be shown at museums and cathedrals in Birmingham, Belfast, Glasgow, Newcastle upon Tyne, Cardiff, Rochdale and Norwich.

The museum estimates that five million people will see the skeleton on its tour.

Gary Lineker shares letter from refugee who stayed at his home

Girl, 14, charged with murder after man stabbed in Crawley