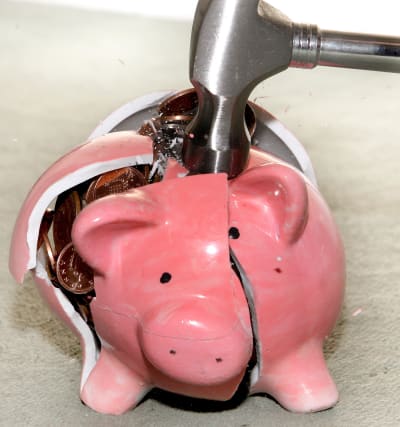 More than one in four households have no emergency savings pot, a survey has suggested.

Some 27% of people in the UK said that, excluding pensions and insurance policies, they have no savings they can quickly access if needed, which was slightly higher than the European average at 26%, according to the ING International Survey of 15 countries.

The survey, which was carried out just before the Bank of England base rate increased from 0.25% to 0.5% in November, also found 28% of people in the UK with debts said they would struggle with rising interest rates.

Within the UK, 12% of those surveyed had debt from a personal loan, 27% had credit card debt, 13% had an overdraft, 7% owed money to friends and family and 8% had student loan debt.

Across the international survey, the most common debt type in most countries was found to be a personal loan.

However, the UK, Turkey, Australia and the United States were exceptions, having much larger proportions of people with credit card debt than with personal loans, the report found.

Ian Bright, senior economist and managing director of group research at ING, said: "The number of households with limited savings indicates how financially fragile many people are.

"Many simply do not have any money left at the end of the month to put aside. But there are also those who could save but don't."

He said that as modest rate rises are passed onto consumers, the motivation to save is likely to increase.

Research from website Moneyfacts.co.uk this week found that the cash savings market has seen a boost in 2018 so far as smaller challenger banks have been increasing their rates and leapfrogging their competition.

James Knightley, chief international economist at ING, said households are right to consider how they will manage their finances in an environment where borrowing costs are higher.

He continued: "That said, central banks are aware that many people have never experienced a period of rising interest rates in their adult life, meaning they are likely to tread cautiously."

More than 14,800 people were surveyed in total across Austria, Belgium, the Czech Republic, France, Germany, Italy, Luxembourg, the Netherlands, Poland, Romania, Spain, Turkey, the UK, Australia and the US.