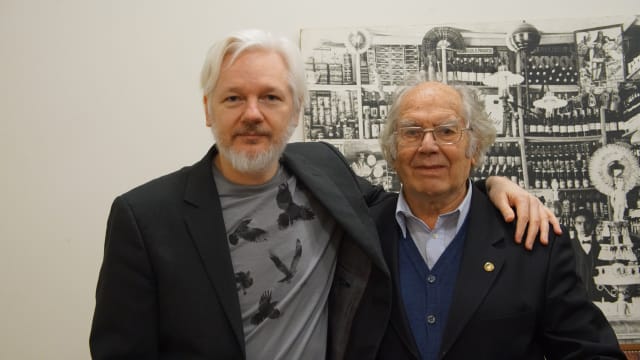 WikiLeaks founder Julian Assange received another visit from actress Pamela Anderson, a day after launching a legal fight against a UK arrest warrant.

The former Baywatch star carried two takeaway coffee cups into the Ecuadorian Embassy in London, where Mr Assange has been living for over five years.

Wearing a black dress and dark glasses, she smiled but made no comment as she was let into the embassy building.

"Unlike some, Adolfo actually met the requirements to win. He is an inspiration to me and many others and continues to do impressive work."

At Westminster Magistrates' Court on Tuesday, Senior District Judge Emma Arbuthnot rejected Mr Assange's legal team's argument that a warrant issued in 2012 was no longer valid because an investigation by the Swedish authorities into a sex-related allegation has been dropped.

His lawyers went on to argue it was no longer proportionate or in the public interest to pursue him for failing to answer bail at a police station as he fought extradition to Sweden.

Judge Arbuthnot adjourned the case until Tuesday February 13 at 2pm at the same court, when she will give her judgment on the public interest argument.