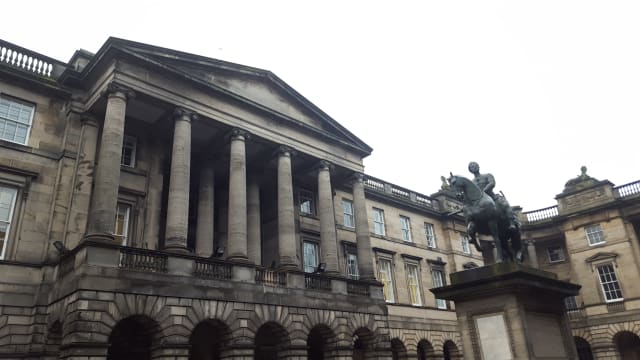 A cross-party group of parliamentarians has lost an early-stage bid to secure a European court ruling on Brexit.

Seven politicians from four parties, not including the Conservatives, believe the UK Parliament could unilaterally halt the Brexit process if the final deal is deemed unacceptable by the Commons.

They claim this offers a third option instead of Britain having to choose between a bad deal on the UK's future relationship with Europe or crashing out of the EU with no deal.

The group is ultimately seeking a definitive ruling from the European Court of Justice (CJEU) on whether the withdrawal process triggered under Article 50 of the Treaty on European Union can be revoked by the UK on its own, without first securing the consent of the other 27 EU member states.

Their legal team went to the Court of Session in Edinburgh last week to ask a judge to refer the question to the Luxembourg court.

On Tuesday, judge Lord Doherty refused to move the case to a full hearing at Scotland's highest civil court, saying the issue is "hypothetical and academic", and that he is "not satisfied the application has a real prospect of success".

The politicians have a right to appeal against the decision to the Inner House of the Court of Session.

The seven elected representatives who launched the case are Green MSPs Andy Wightman and Ross Greer, MEP Alyn Smith and Joanna Cherry QC MP of the SNP, Labour MEPs David Martin and Catherine Stihler and Liberal Democrat MP Christine Jardine. None were present in court as the judge issued his decision.

Aidan O'Neill QC, representing the politicians, previously asked for the case to proceed through the Scottish court, arguing there was a genuine dispute between the two sides as to the proper interpretation of Article 50 which the court required to resolve.

David Johnston QC, for the UK Government, insisted the application has no real prospect of success and that there was "no live issue" for the court to address.

The policy of the UK Government is that the notification under Article 50 will not be withdrawn, he said.

Finding in favour of the Government, Lord Doherty said: "I am mindful that demonstrating a real prospect of success is a low hurdle for an applicant to overcome.

"However, I am satisfied that that hurdle has not been surmounted. Indeed, in my opinion, the application's prospect of success falls very far short of being a real prospect.

"In my view, the Government's stated policy is very clear. It is that the notification under Article 50(2) will not be withdrawn."

He went on: "Given that neither Parliament nor the Government has any wish to withdraw the notification, the central issue which the petitioners ask the court to decide - whether the UK could unilaterally withdraw the Article 50(2) notification - is hypothetical and academic.

"In those circumstances it is not a matter which this court, or the CJEU, require to adjudicate upon."

The judge concluded: "I am not satisfied that the application has a real prospect of success ... Permission to proceed is refused."

The legal action was launched following a crowdfunding campaign and is backed by the Good Law Project.

Project director Jo Maugham QC tweeted after the hearing: "It's plainly in the national interest that MPs, MEPs and MSPs, who face a choice whether to approve Theresa May's deal, know what options are open to them if they don't.

"I will support an appeal against this decision - to the Supreme Court if necessary."