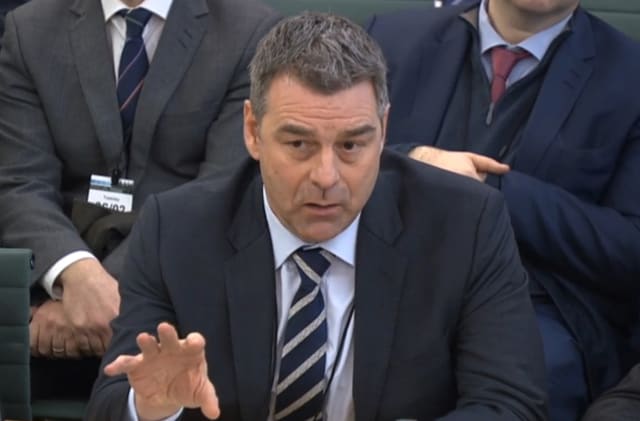 Executives at defunct construction giant Carillion have been branded "delusional" and accused of playing the blame game by MPs, as a damning report revealed how company bosses presided over a string of failures that led to its collapse.

A raft of former board members faced MPs from the Business and Pensions Committees, who pushed bosses to take responsibility over the company's rapid decline.

MPs Rachel Reeves and Frank Field - who are co-chairs of the joint committee inquiry - said the executives were "a series of delusional characters" who "maintained that everything was hunky dory until it all went suddenly and unforeseeably wrong".

"We heard variously that this was the fault of the Bank of England, the foreign exchange markets, advisers, Brexit, the snap election, investors, suppliers, the construction industry, the business culture of the Middle East and professional designers of concrete beams."

Ms Reeves and Mr Field said everything they had seen "points the finger in another direction - to the people who built a giant company on sand in a desperate dash for cash."

A freshly released report compiled by Carillion just days before its collapse in January showed the company was well aware of a growing pile of problems at the doomed firm.

"The group had become too complex with an overly short-term focus, weak operational risk management and too many distractions outside of our 'core'," the presentation said.

It also highlighted "poor planning of effective contract controls and monitoring", "insufficient understanding of and adherence to contract requirements", and a "lack of ownership of issues".

During the committee hearing, former chief executive Keith Cochrane admitted he should have acted sooner before the company's collapse, but claimed that all the decisions he took were in Carillion's best interest, while former finance director Zafar Khan defended his track record over his nine months at the firm.

He said: "I don't believe I was asleep at the wheel because as soon as I came into the role, we were looking to tackle the issues and the key focus of my time in the role was to bring net debt down."

He added: "I believe I did everything that I could have done, essentially."

The executives brushed off suggestions that Carillion was looking out for shareholders at the expense of employees, having continued to pay dividends while the company was struggling under the weight of a hefty pension deficit last cited at £587 million.

But Mr Cochrane said cancelling the £50 million dividend payment in 2017 would not have had a significant impact on the company's finances.

Carillion's schemes are being transferred to the public Pension Protection Fund (PPF), which means eligible staff are likely to receive just a portion of their promised pensions.

The former finance director went on to pin the company's collapse on issues including Brexit, saying it compounded the difficulties in replacing a number of contracts that were coming to a close.

Another former boss, Richard Howson, claimed the company was "well run" but that there were "things that I would have done differently" - while another former finance chief, Richard Adam, said that he knew Carillion was in a "challenging position" when he left the firm in December 2016.

But both were accused of offering "just words" when it came to apologies over the collapse of Carillion.

"I know there will be a review of whether those bonuses were properly paid in line with processes and if the outcome of that review says that the bonuses should be paid back by any extent then I'll abide by that decision," he said.

However, neither confirmed that they would voluntarily give up part of their bonus in light of the collapse.

He added: "We went into the year with too much debt. Contracts deteriorated rapidly and because we didn't have that wiggle room, that was a significant factor."