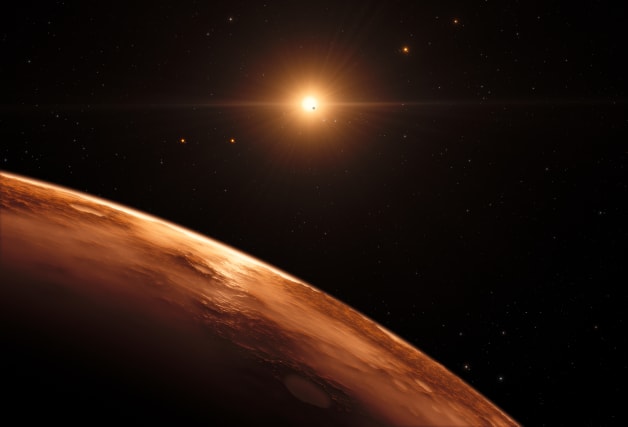 New observations of a tightly packed family of planets 40 light years from Earth have confirmed that it could be the best place to find life outside our solar system.

The Trappist-1 planetary system hit the headlines a year ago when astronomers revealed that it contained a multitude of Earth-like worlds.

Fascinating new details about the seven Trappist-1 planets have now come to light as scientists attempt to learn more about their composition and atmospheres.

The Hubble Space Telescope was used to capture faint tell-tale light signals as the planets passed in front of their star.

Analysis of the way starlight interacted with the planets' atmospheres showed that all seven worlds were mostly made of rock, like the Earth, with water accounting for up to 5% of their mass.

By comparison the oceans account for just 0.02% of the mass of the Earth. Experts agree that water, ideally in its liquid state, is a prerequisite for life as we know it.

At least four of the Trappist-1 planets are thought to have temperate climates, opening up the possibility of surface oceans, lakes or rivers.

One, Trappist-1e, stands out as being the most Earth-like in terms of its size, density and the amount of light energy received from its star.

Dr Amaury Triaud, from the University of Birmingham, a leading member of the international team, said: "Of the seven planets, and of all the exoplanets that have been identified so far, Trappist-1e is the most resembling Earth, when we consider the amount of energy a planet receives from its star, and its density, which reflects its internal composition.

"As our next step we would like to find out whether the planet has an atmosphere, since our only method to detect presence of biology beyond the solar system relies on studying the chemistry of an exoplanet's atmosphere."

He stressed that despite the speculation scientists were still "far from establishing" whether Trappist-1e really does have conditions suitable for life.

It will be the first of a new generation of telescopes with the ability to seek chemical sign-posts of life in exoplanet atmospheres.

The Trappist-1 planets circle a cool red-dwarf star just 9% as massive as the sun.

Because it is so faint, the star's "habitable zone" - the orbital region where water can exist as a liquid - is much closer in than the sun's.

As a result the seven planets are all nearer their star than Mercury is to the sun, yet enjoy relatively mild climates.

The worlds are also so huddled together that a person standing on any one of them would have a spectacular view of their celestial neighbours.

In some cases, the planets could appear larger than the moon seen from the Earth, said the astronomers.

The planets may also be tidally locked, meaning the same face is always pointing towards the star.

The findings from a series of four studies appear in the journals Nature Astronomy, and Astronomy and Astrophysics.

Co-author Professor Brice-Olivier Demory, from the University of Bern in Germany, said: "Our study is an important step forward as we continue to explore whether these planets could support life."

Trappist-1 is named after the Transiting Planets and Planetesimals Small Telescope (Trappist) in Chile, which discovered the first two planets in the system.