Thousands of Carillion workers 'in limbo' as 377 made redundant 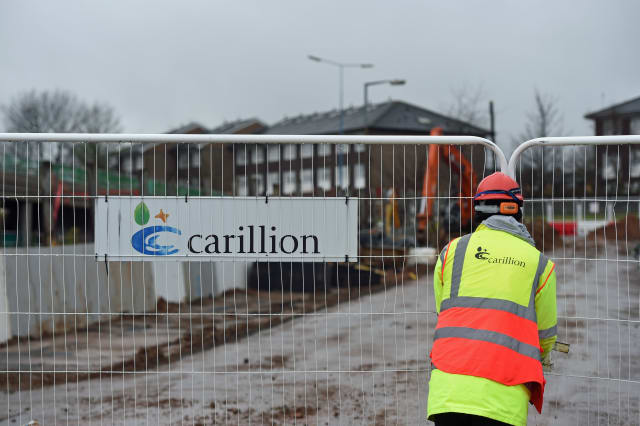 Thousands of Carillion workers are facing "chaos and confusion", a union has warned, after 377 redundancies at the collapsed group were confirmed.

Some 919 workers at the giant construction and outsourcing firm have had their jobs protected.

But "despite best efforts" it has not been possible to save the jobs of 377 staff, a spokesman for the official receiver said.

The staff whose jobs have been saved are involved in infrastructure projects, central and local government, and construction contracts and are transferring to new employers who have taken on this work.

The official receiver's spokesman said: "As part of the ongoing liquidation of the Carillion group I am pleased we have been able to safeguard the jobs of 919 employees today.

"Most staff are transferring on existing or similar terms and I will continue to facilitate this wherever possible as we work to find new providers for Carillion's other contracts.

"Despite best efforts it has not been possible to secure the jobs of 377 staff, who will be made redundant."

Workers who have lost their jobs will be entitled to make a claim for statutory redundancy payments and the Jobcentre Plus "rapid response service" would provide support, the spokesman said.

"I recognise that this will be a worrying time for all those affected, their families and local communities," the spokesman continued.

"I would like to thank all staff for their professionalism throughout the liquidation.

"I am expecting many employees working on other Carillion contracts to transfer in the coming weeks and we are continuing to keep the workforce updated as these arrangements are finalised."

A Unite spokesman said: "The latest redundancy announcement has increased the feeling of chaos and confusion which has stalked Carillion since its collapse last month.

"Workers don't know if they will get paid from one day to the next and could be made redundant or transferred to a new contractor on lower wages at a moment's notice.

"Thousands of workers remain in limbo and don't know if they will be able to continue to feed their families."

A Government spokesman said: "Understandably, this will be a very difficult time for those who have been made redundant and their families.

"As with almost all insolvencies, there are unfortunately a number of redundancies, and government stands ready to support those affected through Jobcentre Plus' Rapid Response Service.

"We continue to work hard to minimise the impacts of insolvency and ensure that public services run safely."