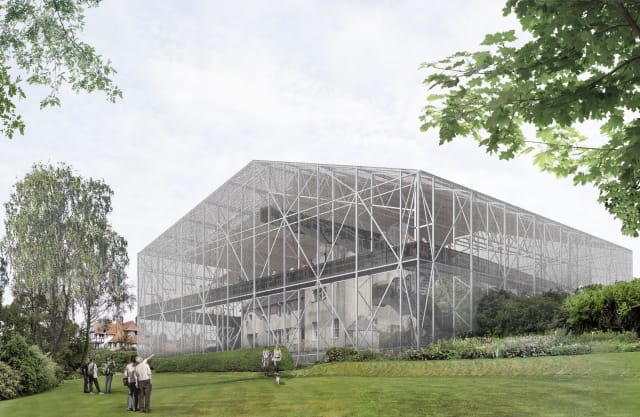 An urgent fundraising appeal has been launched to raise £1.5 million to build a protective box around a crumbling architectural masterpiece.

The National Trust for Scotland (NTS) plans to build a huge transparent cage around the Charles Rennie Mackintosh designed Hill House, whose sandstone structure is dissolving.

The property was built as a "home for the future" by Mackintosh between 1902 and 1904 but his choice of the new material Portland cement for the render led to problems as it has allowed water to soak in from the day it was first applied.

Decades of driving west coast wind and rain have saturated the walls, threatening the long-term survival of the property in Helensburgh, Argyll and Bute.

The trust has already secured £3 million towards the construction of the box but needs another £1.5 million by the end of spring 2018 to reach the overall target.

Richard Williams, general manager for Glasgow and West at NTS, said: "This is one of the most urgent and important appeals in our history.

"We have very limited time to get the box in place around the Hill House and start the process of drying the building out.

"It's imperative that we secure the funds as soon as possible, to begin construction and protect the building from further degradation.

"The box shelter will also allow visitors to see the building from a completely new perspective, with walkways and an opportunity to get to rooftop level."

Assembly of the box is expected to begin in June this year, protecting the property from another winter.

Supporting the launch of the Box: The Hill House Appeal, CYBG, owner of Clydesdale Bank, has donated the original printing plate used to produce its £100 note, which features Charles Rennie Mackintosh.

The plate and a £100 specimen bank note have been mounted in a presentation frame and will be auctioned off later this year with all proceeds going towards the campaign.

This weekend, every NTS member will receive a letter asking them to support the appeal.

The cage, designed by architects Carmody Groarke, will keep out the elements while conservationists come up with ways to protect the house for the long-term.

The building will remain open to the public while conservationists are at work.

Debbie Crosbie, group chief operating officer and executive director at CYBG, said: "The Box honours Charles Rennie Mackintosh's work with its innovative and unique design, and will ensure that the Hill House remains an important part of our cultural landscape.

"We're delighted to support this incredible initiative to preserve one of Scotland's most well-known and celebrated architectural gems."

Born in 1868, Mackintosh trained as an architect and went on to create much-admired buildings including the Glasgow School of Art and Scotland Street School in Glasgow.

Fans of his work include Hollywood star Brad Pitt, who visited Hill House privately in August 2011 with then partner Angelina Jolie while he was shooting the film World War Z.

Donations can be made at www.nts.org.uk/Campaign/Help-us-save-the-Hill-House