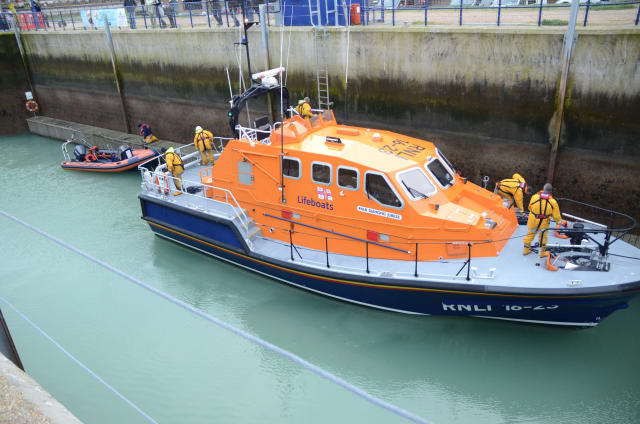 A man has been charged with people smuggling after nine migrants were rescued from a boat crossing the English Channel.

Afrim Xhekaliu has been charged with assisting illegal entry after he and eight others were rescued by lifeboat crews.

The 40-year-old, of Barnet, north London, is due to appear via video link at Brighton Magistrates' Court on Friday.

A second arrested man, who was also on board the boat, has been released with no further action and is being dealt with by Immigration Enforcement.

National Crime Agency officers also arrested a third man in Crawley on Wednesday night who has been released under investigation.

Eight men and one woman, who told Border Force officers they were Albanian, were rescued from the Dover Strait on Wednesday morning.

A search and rescue operation involving the Maritime and Coastguard Agency, the RNLI, Border Force and the NCA was launched after a small boat was spotted off the coast of East Sussex.

A rigid hull inflatable boat, carrying nine people, was eventually located and those on board taken by lifeboat to Eastbourne harbour.

Martin Grace, NCA senior investigating officer, said: "This incident demonstrates the dangers associated with attempts to cross the Channel in this manner, and it is extremely fortunate that all those on this vessel were able to be recovered safe and well."