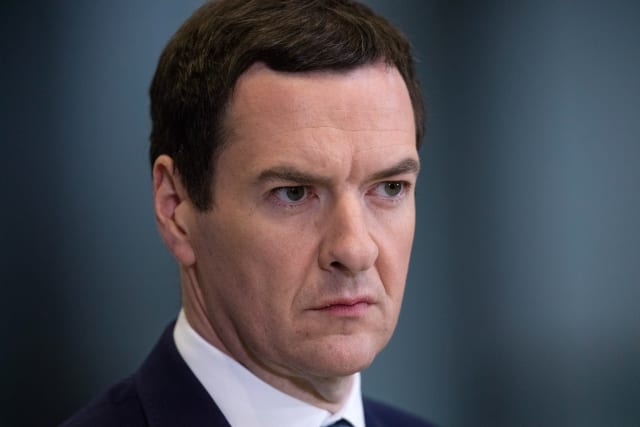 George Osborne has said the "sums don't stack up" for severing economic ties with the European Union and warned Tories they could face electoral defeat unless Theresa May ditches her Brexit plans.

The former chancellor said the way to take on Jeremy Corbyn's Labour was to put a "sound economic plan forward" but the Prime Minister's decision to take the UK out of the single market and customs union was a risk.

He said an increasing number of Tory MPs were now considering whether the UK should be in the European Free Trade Association, like Norway and Switzerland, and questioned whether Mrs May would be able to get a majority for leaving the customs union in Parliament.

Mr Osborne, who was sacked as chancellor by Mrs May, has described her as a "dead woman walking" and repeatedly used the pages of his London Evening Standard newspaper to criticise her Brexit plans.

On BBC Radio 4's Today programme he said leaked analysis of the economic impact of Brexit should force a change in the Tory approach.

The analysis, obtained by website Buzzfeed, suggested that, even with a comprehensive EU trade deal, UK growth would be down by 5% over the next 15 years, rising to an 8% hit if Britain left without a deal.

Mr Osborne said: "We now face a series of choices about the kind of Brexit we want and we have a much clearer idea of the consequences."

He added: "We should look clearly at the costs and benefits of, for example, leaving the customs union and doing less trade with Europe versus what we might gain from doing a trade deal with America.

"At the moment the sums don't stack up for that kind of decision."

Efta members Norway, Switzerland, Iceland and Liechtenstein have very close relations with the EU and joining it would be viewed as a betrayal by Brexiteers.

But Mr Osborne said:  "These are the choices we face and if we are saying we want out of all of our economic arrangements with our European neighbours then we are embarking on a risky economic course according to the figures that the Government themselves have produced."

In a message to Tory MPs nervous about keeping their seats, he said: "If you want to put a better argument to the country than the one Jeremy Corbyn is putting, which is in my view a risky economic proposition, then you have got to put a sound economic plan forward.

"You can't put, yourself, to the country a risky economic proposition."

With Mrs May on a trade mission to China with her position under pressure at home, Mr Osborne said the Tory party had to offer "a big plan for the future".

He said: "The Conservative Party, which I have worked very hard over my lifetime to put back in a position where it could be the Government, must offer to the country a big plan for the future, big ideas, big vision, whether it's transforming schools in the north of England, or a plan to engage with the rest of the world like China, or indeed a form of Brexit which is not as economically damaging as some of the forms being proposed.

"I would humbly suggest that's what is required."