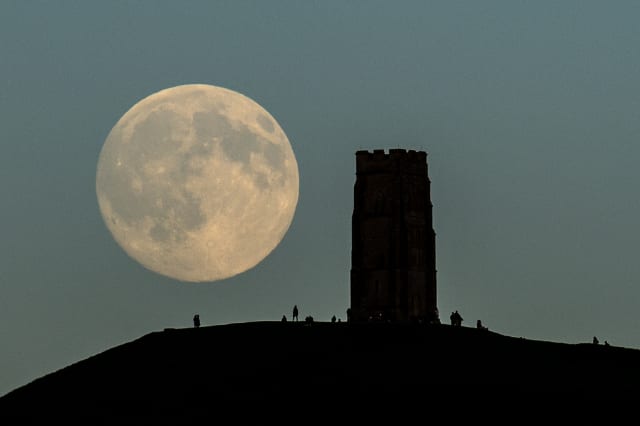 Forecasters have urged stargazers not to let wet weather dampen their hopes of seeing the blue moon.

Wet weather has been forecast across parts of the UK and Ireland on Wednesday.

But according to Met Office meteorologist Alex Burkill there should be "clear breaks in the skies even amongst the showers".

A blue moon, defined as the second full moon in a calendar month, will rise in the sky on Wednesday evening for the first time since July 2015.

It will also be a supermoon, meaning the Earth's natural satellite will appear 14% bigger and 30% brighter in the sky as it reaches its closest point to Earth.

For those keen to catch an early glimpse of the phenomenon, Mr Burkill says a good time to see the celestial event will be at around 6pm or after when "the supermoon will probably be at its lowest point in the sky".

He added: "Even if you go out and have cloudy skies don't give up hope - you may be able to get a good view later in the night."

Dr Gregory Brown, an astronomer at the Royal Observatory Greenwich, said the moon will rise at about 5pm and will remain in the sky until 8am the following morning.

However astronomy enthusiasts looking to see the blue moon at its top-most point will have to brave the cold and windy weather.

Mr Burkill said: "Temperatures are going to fall overnight to around freezing with even lower temperatures expected in more rural spots.

"The wind will be strongest towards the north of Scotland but overall it is going to be quite cold and pretty windy."

Those expecting to see a lunar eclipse will be disappointed as Dr Brown says it will "definitely not be visible from the UK, not even a partial eclipse".

The eclipse, according to Nasa, will be "extra special" for those in the US and other parts of the world, where the blue moon will coincide with a total lunar eclipse to become a "super blue blood moon".

Wednesday's lunar phase fits the calendar definition of "blue" because there was another full moon on January 2.

Dr Brown said: "This coming full moon is unusual in that it is the second full moon of the month, when typically there is only one full moon per calendar month.

"Also, the full moon will be slightly larger than normal given that this is also a supermoon, so astrophotography will be more spectacular than normal."