Former Cabinet minister breaks back in fall from horse 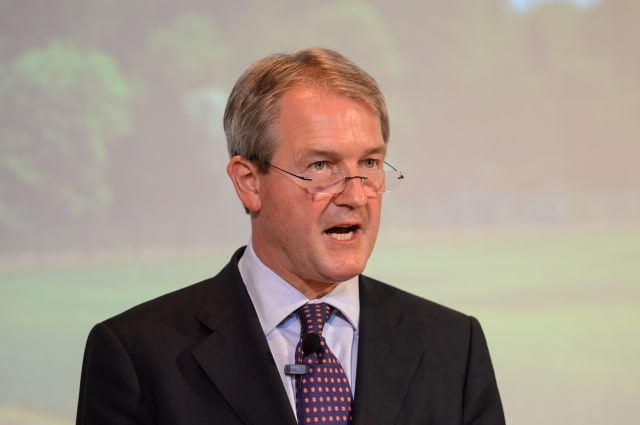 Former Cabinet minister Owen Paterson has broken his back in a riding accident.

The Tory MP said he was "lucky not to have suffered more serious injury" after falling from a horse at the weekend, which left him with two broken vertebrae in his neck and one in his back.

Mr Paterson is being treated in a unit at The Robert Jones and Agnes Hunt Orthopaedic Hospital in Shropshire, for which he "ironically" helped to raise money by taking part in a horse race described as the world's toughest.

He told the Shropshire Star: "Apparently I was very lucky not to have suffered more serious injury.

"I have been told that I have to have complete bed rest, so I will not be going to London, at least for this week. But I am constantly in touch with the office.

"I was so relieved to be in this incredible, world-class unit at the Orthopaedic hospital in Gobowen. The staff are exceptionally professional, exceedingly caring and have a huge amount of expertise."

Mr Paterson was on the board of the Institute of Orthopaedics and raised £60,000 for the unit where he is being treated after taking part in the Mongol Derby in 2011 with his wife, Rose.

"Even more ironically, it is the toughest horse race in the world, 14 hours a day of hard riding for nine days on 25 different and very difficult horses," he said.

"Fellow riders broke ribs, shoulders and other bones in falls during the race. Rose and I always said we were so lucky to complete it unscathed."

Riders taking part in the 1000km Mongol Derby change horses every 40km  as they make their way through the wilderness.

Mr Paterson is continuing to carry out some work from his hospital bed but it is not yet clear when he will be discharged.