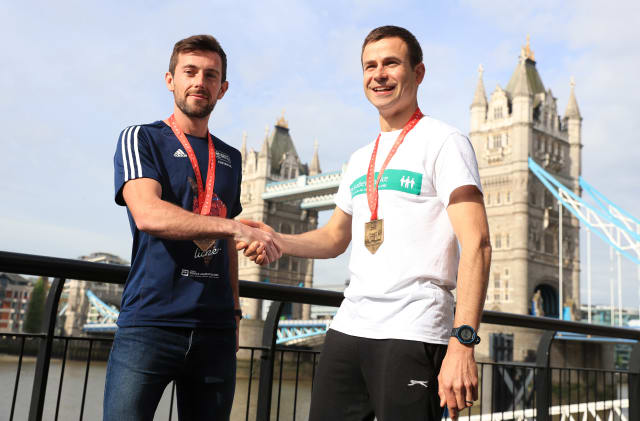 Two runners who came together as strangers to claim the defining moment of last year's London Marathon now plan to tackle 2018's event as friends.

Matthew Rees, a 30-year-old athlete from Swansea, became a sporting hero when he sacrificed his race time to stop and help stricken David Wyeth cross the finish line in April 2017.

Mr Wyeth, 36, of Chorlton Runners in Manchester, was nearing the point of collapse when he found his weight shouldered by the Welshman.

Their moment of comradeship went viral and the pair were hailed for capturing the spirit of the sporting showcase.

Both will compete in this year's race on more familiar terms with each other - having formed a strong friendship.

Mr Wyeth told the Press Association: "It's a bit like speed dating, you are thrown together, but fate has its way.

"What I think has worked is that we have had a very similar perspective of what happened - neither of us have egos about the situation and we are both a bit perplexed by the attention, particularly that next day.

"The fact the cameras were rolling - we filled that void between the elite runners finishing and the coverage switching to talk about the wonderful charity causes, we were part of that anonymous club-runner population."

Mr Rees added: "Since then, it was very similar if we had met in a pub or any other scenario, we compare training and we have been running today, we have done other events together, our partners get on as well.

"We're just good mates now which is really nice, you don't expect to make a friend when you are going to race, that's what can happen."

Mr Wyeth suffered from a phenomenon known as the Foster collapse, where muscles begin to shut down and severely limit movement.

He spent two hours in the medical tent recovering after being helped across the line.

"That was quite a bad experience for my family because they didn't have any information and everyone was just sending pictures of what happened," he said.

But Mr Rees soon realised they had starred in a moment of marathon history.

"I couldn't really use my phone because it was red hot," he recalled.

Both athletes now enjoy a strange degree of local celebrity, with the public sometimes recognising them - but rarely knowing from where.

Mr Wyeth said: "I remember going to parents' evening and being sat in the parents' room and chatting for 10 minutes - this was only a few days after - and then someone who did know asked how recovery was going and other people went 'you're that guy off TV'."

They are now preparing to return to the course which unexpectedly thrust them into the spotlight last year.

Mr Rees said: "I think it is always emotional running the London Marathon, but especially this year after all that happened last year and the year we have had, coming back I think it will be emotional at the start, the finish and most of the way round."

Mr Wyeth added: "It is trying to keep that in check as well, you can't really be spending too much energy on emotion - we need to enjoy it, the goal has to be quite fluid this year.

"My priority has to be finish and finish strong."