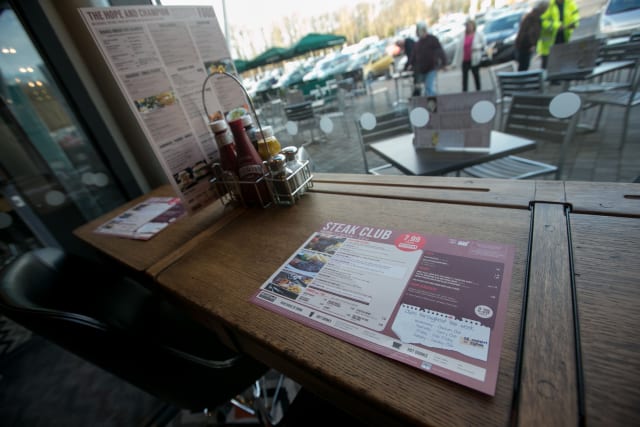 The food safety watchdog has defended the speed of its response in the hygiene investigation into Russell Hume, as more major brands switch from the meat supplier.

Barchester Healthcare, one of the big four care home providers, said Russell Hume supplied one of its 200 homes and the contract had been "immediately terminated following the FSA revelation".

The Food Standards Agency (FSA) probe emerged after Wetherspoon withdrew sirloin, rump and gammon steaks from its 900 pubs on Tuesday, prompting an outcry from regular customers of its weekly steak club.

Russell Hume was instructed to stop production on January 19 after a surprise inspection by the FSA on January 12 found instances of "serious non-compliance with food hygiene regulations".

A recall was then issued four days later on Tuesday, with the supplier initially saying it was a precautionary measure due to mislabelling.

Asked why it took four days to initiate a recall, FSA chief executive Jason Feeney told the BBC's World at One they were "establishing with the company the extent of the recall and the period of the recall".

"Clearly, if the company doesn't decide to voluntarily recall then we can take steps and measures to identify the products and recall them from customers," he said.

Mr Feeney said there were not "serious concerns" after the FSA made an unannounced inspection of a Birmingham plant on January 12 due to "the nature of non-compliances there".

He added: "When we widened the investigation to include all of their plants and also products kept in cold stores by Russell Hume, we then decided this was a more systemic and widespread problem in terms of its scale and nature."

Mr Feeney said there was no evidence anyone had fallen ill and advised companies with Russell Hume products in cold storage to dispose of or return them.

The probe has led to fresh criticism of the meat industry in the wake of the horsemeat and 2 Sisters Food Group cases.

Mary Creagh MP, chairwoman of the Environmental Audit Committee, said: "After the horse meat scandal the Government promised the British public 'never again'. It looks like relabelling, which is food fraud has once again hit the UK meat industry. "

Food safety expert and chartered environmental health practitioner Dr Belinda Stuart-Moonlight said: "The public have historically lost confidence in the industry and it was working incredibly hard to regain that confidence, it's a shame this has happened which could dent confidence again.

"I think it's a very positive move that the FSA have reacted very quickly to intervene and make assurances that nothing that shouldn't be in the supply chain is there."

A spokeswoman for Russell Hume said the investigation had come as a "serious shock" and the firm had an "unblemished" record in 50 years of trading.

She added its practices had been regularly inspected and had "never been challenged like this".

A Hilton spokeswoman said only five hotels had been supplied by Russell Hume and products were disposed of "immediately" while brewer Greene King said it only took a "handful" of products from the supplier, although these were potentially sold across all of its more than 1,800 pubs.

Novus Leisure, which runs bar chain Tiger Tiger, apologised to customers and said it was working with other suppliers while Marston's, which runs 1,550 pubs across Britain, said it was notified just before the FSA announcement on Wednesday and Russell Hume was not its sole supplier.

A Buckingham Palace spokeswoman declined to comment on a report in the Daily Mail that the royal households may have been supplied by the company, which once held a royal warrant more than a decade ago.