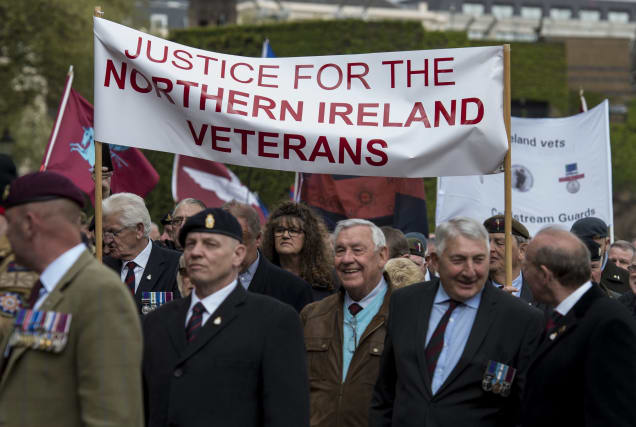 New recruits could be deterred from joining the UK's armed forces because of the possibility of prosecution decades later, an MP has warned.

Ruth Smeeth made the claim during a debate on a proposed statute of limitations for the prosecution of soldiers who served during the Troubles in Northern Ireland.

The Stoke on Trent representative said: "This has a knock-on effect on those who are looking to serve in the future.

MPs spent more than an hour discussing a defence committee report which favours a statue of limitations, coupled with a truth-recovery process to help families bereaved during the Troubles.

However, the report, published last month, has stopped short of recommending the proposal for all sides during the Troubles as it "would be for the next government to decide".

Ms Smeeth added: "These are issues that we can ignore no longer. Our brave service personnel were acting under orders; we asked them to do many things for us; we need to have their backs when they need us."

The Government indicated a statute of limitations would be included in a public consultation exercise in Northern Ireland on future mechanisms to deal with the legacy of the Troubles.

The concept of an amnesty has gained traction among a number of Westminster backbenchers, who claim recent prosecutions of former British soldiers are tantamount to a "witch-hunt".

However, prosecutors and police in Northern Ireland insist such allegations simply do not stand up to scrutiny, with a breakdown of figures showing no disproportionate focus on ex-security force members.

Conservative MP and former soldier Johnny Mercer called for a halt to the "totally unacceptable practice of pensioners who have served in this country" being "relentlessly under scrutiny".

"The principles which we are engaged in here go far beyond the Northern Ireland context," he said.

Meanwhile, among those present for the debate were relatives of 10 people killed by soldiers during an incident known as the "Ballymurphy massacre".

John Teggart, who lost his father, said the discussion had been "one sided".

"You can't debate an issue when they are all singing off the same hymn sheet," he said. "I am not happy; the voice of victims was left sitting in the public gallery."

He said: "There must be no immunity for people who have killed Irish citizens. A fundamental democratic principle is equality under the law, and this proposal runs entirely contrary to that."

In a statement, Amnesty International called for the government to reject any moves to legislate for a statute of limitations.

Grainne Teggart, the charity's Northern Ireland campaigns manager, said: "All victims of human rights violations and abuses from Northern Ireland's conflict have a right to an independent investigation, with the possibility of prosecutions to follow where the evidence leads.