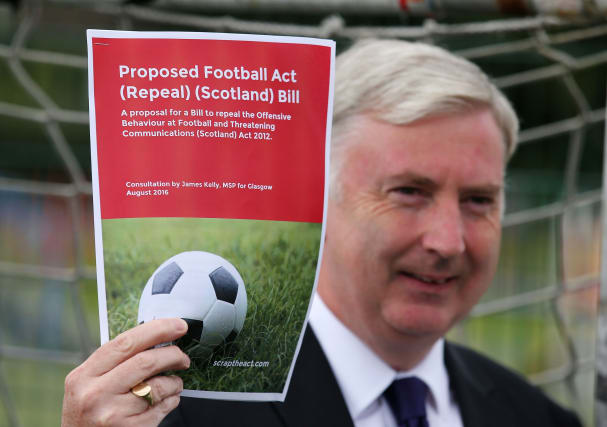 The Scottish Government has been urged to "respect the will of parliament" after MSPs voted to repeal a controversial law aimed at tackling sectarian behaviour at football.

Opposition politicians joined to back Labour MSP James Kelly's legislation to scrap the Offensive Behaviour at Football and Threatening Communications (Scotland) Act at its first vote at the Scottish Parliament.

The SNP used its majority in the last parliament to introduce the Act in the face of opposition from all other parties - and since being implemented it has faced criticism from football fans and the legal profession.

Mr Kelly said the act has "got to go" but the SNP called on him to explain why he "wants to effectively give the green light to sectarian and offensive behaviour".

Following the 65 to 61 vote in favour of his repeal bill, he said: "Parliament has now made the clear decision to back the repeal of the Football Act. It is discredited legislation which has failed to make any progress in tackling sectarianism, while at the same time dividing fans and the police.

"It is time for the SNP government to listen to the will of Parliament and get behind repeal. Instead of continuing to pursue this broken law, it must work to unify parties, anti-sectarian organisations, faith groups and education leaders, and start taking the problem of sectarianism seriously.

"It is not tenable for the one party, the governing party, to continue to argue for a law condemned by legal experts, equalities organisations and human rights groups, which is now without the support of Parliament. The Football Act has got to go."

SNP MSP James Dornan said the vote is "deeply concerning", adding: "Mr Kelly is a politician doggedly pursuing a self-serving agenda - and now opposition parties have joined him in being deaf to the views of the vast majority of people and stakeholder groups across Scotland.

"Mr Kelly should now explain to the public why he wants to effectively give the green light to sectarian and offensive behaviour, and create a potentially serious gap in the law when it comes to prosecuting threatening online behaviour.

"It's not too late for him to drop his obsession with undermining the fight against sectarianism - and I hope that he sees sense and does just that."

During the debate Mr Kelly highlighted offences involving religious aggravation have increased from 696 the year before the act was brought in to 719, only 7% of which were football fans.

"The act has completely failed in terms of tackling sectarianism. What we need is a completely new approach."

She added: "Simply going back to where we were before the act was introduced is retrograde and counterproductive and will do nothing to tackle abusive behaviour at football or protect vulnerable communities."

Mr Kelly's Bill has been backed by a narrow majority of MSPs on Holyrood's Justice Committee, who found existing laws generally cover behaviour the Act criminalises.

Tory MSP Liam Kerr said: "The 2012 Act is bad law. On its progress through Parliament the initial bill was met with criticism and disapproval from all opposition parties who believed the legislation was unfair, unworkable and inconsistent.

"Almost five years later, it is clear the consensus remains."