Lansman: Momentum is the 'new mainstream' of politics 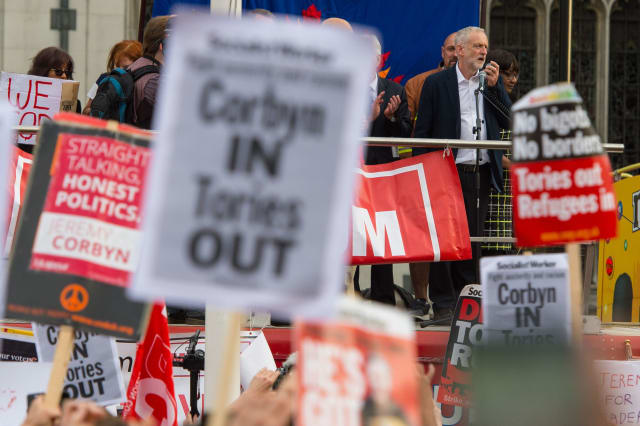 The leader of the Jeremy Corbyn-supporting Momentum group has claimed that the movement is now the "mainstream" of British politics.

Jon Lansman said the UK "could be only months away from a Corbyn government" that would radically change the country.

He said Mr Corbyn's leadership of the Labour Party meant that it could now champion a greater role for the state after it had been "slagged off" by politicians across the political spectrum for decades.

On BBC2's Newsnight he said:  "I think the great thing that we have achieved as a result of Jeremy's election as leader of the Labour Party is that we can actually voice what most members of the Labour Party always believed, which is that the state can do good things.

"The state has been slagged off by, unfortunately, too many politicians across the spectrum over the last 30 years."

He added: "Am I the radical man? I think I'm the mainstream man. Momentum is the new mainstream."

In a sign of Labour's shift, its ruling body has voted to advise a north London council run by the party to potentially halt a controversial public-private housing scheme, sources said.

Haringey Council's plan for a 50-50 partnership with developer Lendlease has proved highly controversial and has reportedly led to the deselection of several sitting Labour councillors, who have been replaced by candidates backed by Momentum.

In an unusual move, Labour's national executive committee (NEC) voted unanimously to ask the local authority to halt the plan unless there can be successful mediation after 22 councillors wrote to the ruling body asking them to intervene.

Mr Lansman, who was voted onto the NEC earlier this month, said: "I can understand in the past why Labour councils thought you might have to do those kinds of deals as perhaps the only option, but I think now we could be only months away from a Corbyn government.

"I think we have got a much greater opportunity here to radically change."

"I am pleased with the new spirit of unity that we saw on the NEC this week, that we - I think - now see in the PLP (Parliamentary Labour Party) that recognises that Jeremy is here to stay, that we are seeking a transformative government."