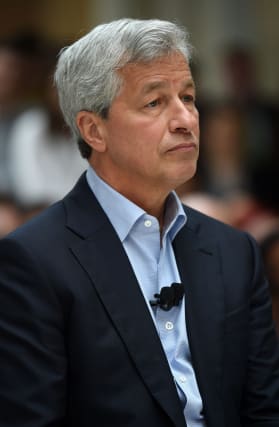 Banking chiefs have issued fresh warnings over Brexit, with JP Morgan poised to shift more than 4,000 UK staff abroad in a worst-case divorce, while the boss of Barclays has bemoaned its impact on the British economy.

Chief executive Jamie Dimon revived fears of a mass exodus of JP Morgan bankers as he upped previous estimates for the number of UK-based staff who would be forced to relocate if negotiators failed to gain a favourable Brexit deal for financial services.

"If we can't find reciprocal recognition of rules - and there are a lot of people who are mad with the Brits for leaving and want their pound of flesh - then it could be bad," Mr Dimon told the BBC.

That would account for more than a quarter of the company's near-16,000 UK workers.

The Wall Street banking boss said in the wake of the Brexit vote that around 4,000 jobs could leave the UK, but that figure was later lowered, with JP Morgan expected to move between 500 and 1,000 staff to cities including Frankfurt, Dublin and Luxembourg in order to secure its EU business.

Mr Dimon was among a  raft of politicians, celebrities and business leaders at the World Economic Forum's annual meeting in Davos, Switzerland, this week.

Speaking on the sidelines of the high-profile event, Barclays chief Jes Staley lamented Brexit's impact on the UK but praised British authorities for their work to date.

"The Bank of England has done quite a good job of navigating thus far post-Brexit, but there is a new competitive environment out there and we've got Brexit coming up, so the UK has got challenges," Mr Staley told CNBC.

Barclays itself is planning to bulk up its Dublin office, which is set to serve as its EU hub and potentially see its local employee base double by 150 staff.

Mr Staley was part of a roundtable of financial services executives who met Prime Minister Theresa May and Chancellor Philip Hammond earlier this month to discuss the impact of Brexit.

The business leaders emphasised the need for as much certainty as possible,  because many foreign banks are expected to start moving key operations and staff to the EU by the end of the first quarter if negotiators fail to agree to a Brexit transition period which would allow financial services to conduct business across the bloc beyond 2019.

Mr Staley said: "It's complicated, I think, the Brexit negotiations, but our dialogue with the Bank of England, with the regulators, with Her Majesty's Treasury, has been very constructive, and ... we think there's a keen interest by the British Government to keep London competitive, and to keep Barclays competitive,.

"What I think is important is that we are listened to, and that we have a voice in the discussions with the Chancellor and with the Prime Minister, and we have that, so let's see what happens over the next year."