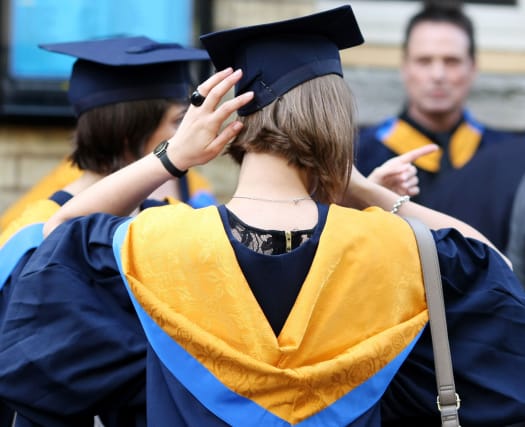 A record number of students from the poorest backgrounds are entering top universities, but the richest 18-year-olds are almost six times more likely to be placed, figures show.

Applications from the most advantaged students were also at a record high last year, according to equalities data from Ucas.

But the gap between the most advantaged and disadvantaged students entering higher education remains, as richer students are 2.3 times more likely to enter university, than the poorest students.

Researchers found that, since 2012, there has been a rise in the proportion of poorer students entering top institutions - an increase of 67% - but that overall, one in 25 students from the poorest backgrounds gains admission.

This compares with roughly one in five among the most advantaged students, who are 5.5 times more likely to aim for higher tariff universities - institutions with higher entry requirements.

Researchers say the ratio has narrowed from 7.6 times in 2011.

Overall, across 132 UK universities, there were 132,740 applications from the most disadvantaged students, compared with 412,290 applications among the richest students by the June deadline.

The data follows a report by education charity the Sutton Trust in December, which found that bright students from poor backgrounds were more likely to be predicted A-level grades lower than their eventual grade.

The study by Dr Gill Wyness of the UCL institute of Education also said that disadvantaged students were less likely to get help with their personal statements.

Such factors mean affected students - estimated to be about 1,000 each year - are likely to apply for less selective degree courses.

Selective universities, including Russell Group institutions, have been under pressure from the social mobility group to increase their intake of students from poorer backgrounds.

A Sutton Trust study last year led by academics at Durham and Warwick suggested that lowering offers for poor students based on their background could see their admission on top course increase by 50%.

"Where there are differences in offer rates, we encourage providers to use these data to explore why.

"However, these data also show that, while progress continues to be made in widening participation, particularly at universities with a higher entry tariff, large disparities remain between the groups entering higher education generally, and at individual universities and colleges.

The figures account for 132 universities across the UK and are intended to help universities evaluate their performance in widening participation, UCAS said.