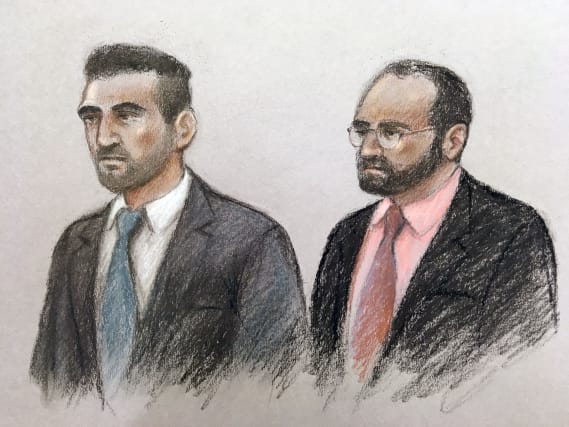 A builder told his wife "a darkness came over me" after he allegedly abducted, raped and cut the throats of two young women, a court has heard.

Builder Mujahid Arshid, 33, also told Aisha Kalyansingh that he was "running away" when she demanded to know where her niece Celine Dookhran was, the Old Bailey heard.

The 20-year-old Barclays Bank worker had failed to turn up for work in July last year sparking a desperate search for her and another woman, who cannot be identified.

Arshid is accused of snatching the women with the help of labourer Vincent Tappu, and taking them to an empty house in Kingston, south-west London, where he allegedly raped them and slashed them with a knife.

He stuffed Ms Dookhran's body into a freezer and left with the surviving woman, who was taken to hospital by his brother suffering from cuts to her neck and wrists, the court has heard.

The prosecution allege Arshid had become obsessed with the women and killed Ms Dookhran so no-one else could have her.

In WhatsApp messages with the defendant, Ms Kalyansingh called him a "psycho" and accused her husband of attacking the women.

But Arshid claimed "they attacked me", adding: "A darkness came over me."

He cast blame at the surviving woman saying: "(She) planned it with me. It was her idea about Celine."

He told his wife he was "running away" and would contact her when he got to Pakistan, but she told him he was "dead to me".

Ealier, Ms Kalyansingh described the events leading up to the alleged abduction of her niece and the other woman.

She told how Ms Dookhran had come to live with them after having problems with her family over her Libyan boyfriend Omar.

Prosecutor Crispin Aylett QC asked how Ms Dookhran got along with the defendant and she said: "He was fine. He loved having her around. Very friendly, chatting, talking to each other."

The day before the alleged kidnapping, Ms Dookhran had been pressured to end the relationship with Omar during a family meeting.

The witness said her husband went to a shed and produced an axe before Omar arrived.

Ms Kalyansingh said: "When he showed me, I said 'what are you doing' and he said 'it's just for safety'.

On the young couple's response, she said: "They both said it's not worth all the hassle. It's better to stop talking."

Mr Aylett said: "Did you believe them?"

She replied: "No. Because they loved each other a lot. You can't just stop just like that."

On the day Ms Dookhran died, Ms Kalyansingh had repeatedly tried to contact her husband while she was at a school working.

At about 3pm, they spoke on the phone and he was "calm" when he told her he had been on a job in east London, the witness said.

When told about the missing women, he suggested they had "run off" and taken £13,000 belonging to Arshid with them.

Ms Kalyansingh said she realised "something was definitely happening" when she found her niece's make-up and clothes missing, but her toothbrush was still at home.

Weeks before, Arshid had bought a taser on eBay but she refused to allow him to keep it in the house, she said.

Arshid, of no fixed address, and Tappu, 28, of Spencer Road, Acton, west London, deny kidnap and false imprisonment, and possession of a firearm with intent.