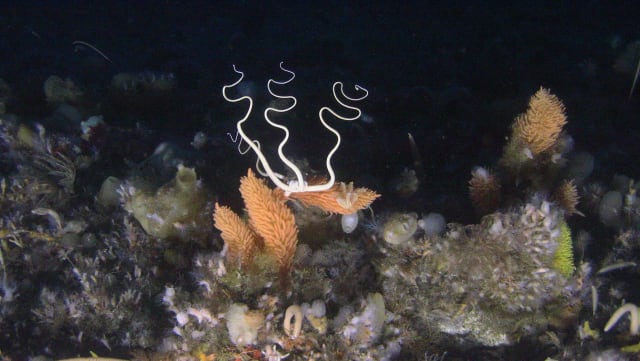 Greenpeace International has released its first submarine footage from a part of the Antarctic seafloor never before visited by humans, as it called for a vast ocean sanctuary in the region.

The footage from the environmental campaign group shows a marine environment rich in sponges, coral and fish.

Greenpeace is calling for an ocean sanctuary covering 1.8 million square kilometres (700,000 square miles) in the Antarctic to protect species including whales and penguins.

Proposals for the sanctuary have been submitted by the EU and backed by the German government and will be considered when the Antarctic Ocean Commission convenes in October 2018.

Greenpeace ship Arctic Sunrise is on a three-month expedition to the region to carry out research, including seafloor submarine dives and sampling for plastic pollution, to highlight the need to protect the fragile habitats found there.

If the sanctuary goes ahead, it will be the biggest protected area on Earth.

John Hocevar, a Greenpeace US marine biologist who piloted the submarine, said the first dive was "amazing".

"I really didn't know what to expect, but we saw so much life, it was very diverse.

"There were a lot of species of sponges, corals, sea squirts, a lot of different kinds of sea stars and their relatives, basket stars, feather stars.

"It was just incredible how the whole bottom was carpeted with life. I really didn't expect it."

Dr Susanne Lockhart, an Antarctic biologist who visited the seafloor in a two-person submarine, said: "We'll be doing further exploration of the bottom of the sea to help determine specific areas that should be a priority for protection from commercial fishing in these pristine waters, as well as building a body of evidence to support proposals for protection in the Antarctic Ocean."