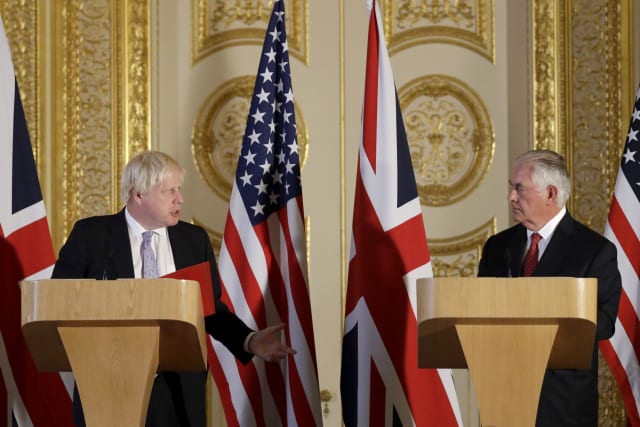 US secretary of state Rex Tillerson is flying into London for talks with Boris Johnson on a "packed" whistle-stop visit.

The Foreign Secretary and his American counterpart are expected to discuss a range of international issues, including the on-going crisis in Yemen.

Donald Trump cancelled a visit to the UK to open the new American embassy, criticising its move from Grosvenor Square in the prestigious Mayfair district of central London to an "off location" at Nine Elms, south of the Thames.

But Mr Tillerson has said he is hoping to visit the cube-shaped 12 storey glass building.

Mr Johnson is packing the agenda for his visit, "but I hope to get by the embassy", he said.

Mr Trump's decision to cancel a visit to London will allow Theresa May to focus on Brexit, Mr Tillerson has suggested.

He told reporters last week: "President Trump was supportive of the UK's exit from the EU.

"He still thinks that was the right decision for them.

"Britain needs to focus on those Brexit negotiations right now, which is really important to them, and I think the president realises that's where Prime Minister May really needs to focus her attention, working through the negotiation around the exit."

Mr Tillerson is visiting in London on a European tour that includes stop-offs in Paris, Warsaw and the World Economic Forum meeting at Davos.