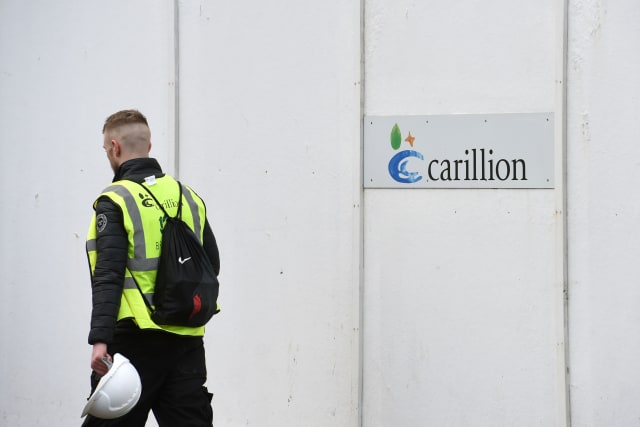 Help offered by the banks to businesses owed money by the failed outsourcing giant Carillion will be no more than a "sticking plaster" solution, industry representatives have warned.

Business Secretary Greg Clark said ministers are working with the banks, trade unions and industry organisations to ensure that everything possible is done to provide "continuity" to thousands of small businesses which have been delivering services as sub-contractors to Carillion.

Banks had agreed to provide "tailored support" worth almost £250 million to those facing a hit from the failure of the company, which owed huge sums when it went into liquidation on Monday, he said.

But Mike Cherry, policy chairman of the Federation of Small Businesses (FSB), said that support offered by the banks would "probably" not be enough for many businesses and self-employed contractors.

"It is only going to be a sticking plaster to help those who are viable to continue in business and recover in time," Mr Cherry told BBC Radio 4's Today programme.

"We all need to understand that it is very unlikely - as in any administration or liquidation - that those who have already invoiced Carillion up to the announcement on Monday are going to get anything out of this at all."

Mr Clark said that it was "an issue for the Official Receiver" to establish what proportion of Carillion's debts will be paid out to creditors once its assets have been realised.

But he made clear that the payment of executives' salaries would not be treated as a priority, telling Today: "They are creditors along with everyone else."

"There is an exercise going on to make sure that all the contractors are identified, that they are given assistance from the banks, which is very important, but also - because most of these contracts are profitable - that they can be reassigned and can continue," said Mr Clark.

Ministers are working to ensure that "everything we can do to maximise the continuity of these small businesses is done", he said.

Mr Cherry said that Carillion's collapse had highlighted the problem of late payments, which should be stopped "as a matter of urgency".

The FSB had raised concerns with Carillion last year about its policy of extending payment terms to 120 days, he said.

And he called on the Government to give smaller businesses better access to contracts to deliver public services.

"Too many large Government contracts are being placed with a very small number of large companies, when small businesses deserve to get that business and bring better value for the taxpayer," said Mr Cherry.

Labour leader Jeremy Corbyn has said his party would radically shake up procurement rules to end what he called the "outsourcing racket".

Mr Corbyn told The Guardian he wanted to stop "middlemen creaming off the profits" by blocking the Government and local authorities from outsourcing services unless they were failing.

In a departure from cross-party consensus on delivering public services which was cemented by Labour former prime minister Tony Blair, Mr Corbyn said if a decision was taken to outsource a service, there would be a legal statutory requirement to prepare an in-house bid.

Mr Corbyn told The Guardian: "We will rewrite the rules to give the public back control of their services.

"Theresa May exposed the failure of the outsource-first ideology at Prime Minister's Questions when she said the government was 'a customer' not 'the manager' of Carillion.

"I'm sorry, but if these are public contracts we should be the manager and not have a middleman like Carillion creaming off the profits."

But Mr Clark said that Carillion's failure should not be used as a justification for ending the system of private sector provision of public services.

"Most of the time these services are delivered successfully," he told Today.

"What happens sometimes in private businesses is that mistakes are made by the management and bankruptcies happen. That is part of what happens when you contract to the private sector."