Plans for Thatcher statue in Parliament Square likely to be rejected 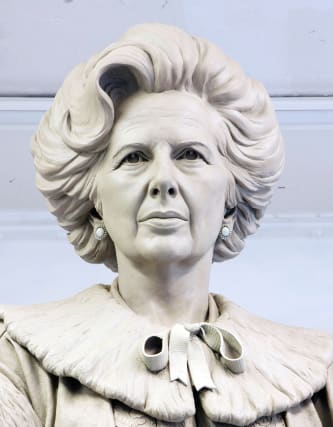 Proposals for a Margaret Thatcher statue in Parliament Square look set to be rejected because there are too many monuments in the area.

It also fails to comply with a 10-year principle which states that no statues should be erected until a decade after the subject's death to "allow partisan passions to cool and enable sober reflection".

A document prepared for Westminster Council's planning meeting on Tuesday stresses that the area is a "monument saturation zone" in which new statues are not permitted unless there is an "exceptionally good reason".

The failure to comply with the 10n-year rule, the depiction of the former Tory leader in state robes which do not "reflect her role as prime minister", and the existence of another statue of her in the adjacent Houses of Parliament mean there is no reason to overturn the council's policy against new monuments in the area, the document states.

It also identifies concerns over potential civil disobedience and vandalism, given the ex-PM's divisive legacy, from the Royal Parks, the Parliamentary Strategic Estates, the Westminster Society, the Thorney Island Society, the adjacent Royal Institute of Chartered Surveyors and others.

And backers of the statue, who hoped the £300,000 memorial to Britain's first female prime minister would join the likes of Winston Churchill, Mahatma Gandhi and other political greats in Parliament Square, have failed to produce evidence of support from the Thatcher family.

Ivan Saxton, co-founder of the Public Memorials Appeal Trust which initially applied for a statue, said in 2016 that there was "talk that (Carol Thatcher, the ex-PM's daughter) didn't like it because it isn't made of iron, but she doesn't mind that it's not made of iron - Carol's upset that there's no handbag".

At the unveiling of her statue outside the House of Commons chamber in 2007, Baroness Thatcher commented: "I might have preferred iron but bronze will do."

Prime Minister Theresa May said in July that the threat of vandalism should not stop the statue being erected.

In 2002 a protester decapitated a £150,000 Italian marble statue of Lady Thatcher on display at London's Guildhall Library.

There have also been cases of an existing resident of Parliament Square, Churchill, falling victim to vandals, including being defaced with graffiti.

The design, by sculptor Douglas Jennings, is said to show the Iron Lady in a "resolute posture looking towards Parliament with a stern gaze".