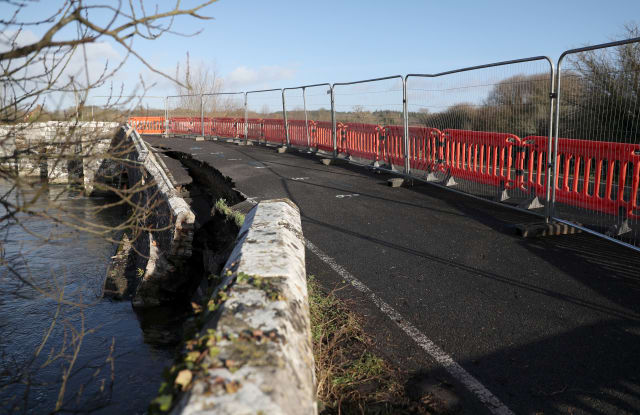 A bridge that features in Tess of the D'Urbervilles by Thomas Hardy has partially collapsed into a river.

The Grade II* listed Wool Bridge was considered to be the best preserved Elizabethan bridge in Dorset, where it crosses the River Frome.

Dorset County Council was first alerted to a potential problem with the bridge on January 10, with an engineer finding a crack in the road.

Parts of the bridge have since "slipped into the river", with a further crack in the arch at the Wool end of the structure.

Yesterday, a part of the arch at the Wool end that was left unsupported by the slipping of the wall, also fell into the river.

"This part may collapse but is well within the area that is protected with barriers. Currently the bridge remains open to pedestrians," a council spokeswoman said.

"A crane has been booked for Friday to begin lifting in large bags filled with stone.

"These will be placed upstream of the slipped wall to protect from further erosion and help to stabilise the wall."

The bags are likely to remain in place until the summer.

"In the meantime, we will be preparing design drawings and getting the various consents required for working on a listed building and in the river," the spokeswoman added.

The bridge, as well as Woolbridge Manor, features in the Thomas Hardy novel Tess of the d'Urbervilles.

It is believed to date from the 16th century, with historical records indicating that repairs were carried out in 1607 and 1688.