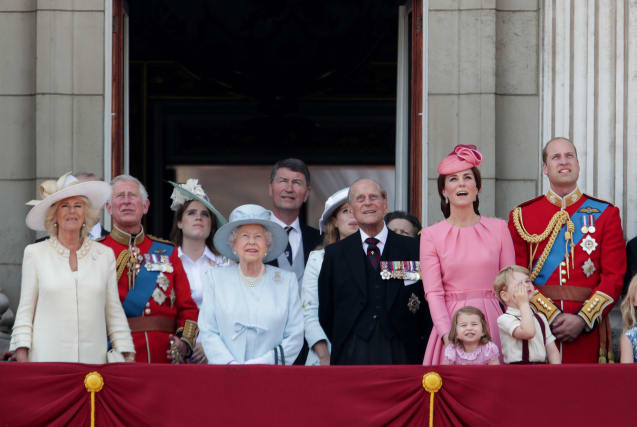 Here's a look at some of the highlights of the official gifts received by members of the royal family over the past 12 months:

The Duke of Edinburgh

Philip received a travel backgammon set from luxury leather goods firm Smythson just a few weeks after he retired - and perhaps has more time for board games now he has stopped his official duties.

He was also given a traditional Spanish cloak by the King and Queen of Spain which featured a standing collar and a crimson velvet lining and was finished with a silver Salamanca-style clasp.

As an official gift, the cloak belongs to the nation, but Philip can still choose to wear it.

As well as glitter balls for the royal Christmas tree, a purple fleece dog bed and the Union Flag from Major Tim Peake's spacesuit, the Queen was also given a Christmas decoration containing Enigma machine paper by GCHQ.

The Queen collected a miniature bottle of whisky during a visit to see The Kelpies equine structures in Falkirk, and now has two framed photographs of elephants courtesy of ZSL Whipsnade Zoo.

The Duke and Duchess of Cambridge

Cufflinks and earrings were popular choices for William and Kate during their trip to Poland and Germany.

But one member of the public seemed keen to ensure George and Charlotte's progress, handing over a collection of educational flashcards to the Duke and Duchess.

Kate was given bamkuch, a traditional European cake, during her solo visit to Luxembourg.

She also received a charm bracelet and a cycling jersey, and from members of the public, some chocolate flowers, 12 madeleines and an oven glove.

George and Charlotte received 59 presents between them in Poland and Germany.

Charlotte also got two dresses and a hair bow, while George was given a waistcoat, two shirts, several T-shirts, two pairs of trousers and a pair of shorts.

The mayor of Gdansk gave the siblings four books and two lollipops.

Three soft toy kookaburras and a lidded coffee cup were handed over by one member of the public to Harry in Singapore last June.

While in Toronto, Canada, for his first public appearance with his now fiancee Meghan Markle at the Invictus Games, Harry received a padded felt owl from the Italian team.

One unnamed person seemed to be catering for both Harry and Ms Markle when they presented the Prince with a large collection of paired presents, including two jackets, two leather holdall bags, two leather belt-bags, two zipped pouches, two passport holders and two baseball caps.

The Prince of Wales

Heir to the throne Charles received 12 bottles of hot sauce and a steel drum in Antigua & Barbuda.

The Prince was also give a pair of shoes, a jar of pickled nuts and seeds and a jar of honey in Romania.

Other food products included a bottle of olive oil, two packets of tagliatelle, a jar of saffron and a bag of lentils in Italy.

Books were by far the most frequent present given to Charles. On his trip to Romania, Austria and Italy in the spring, he received no less than 57.

During a visit to Brunei in the autumn, Charles received a host of gifts from the Sultan of Brunei - a wristwatch, a pair of cufflinks, a ring and a ballpoint pen, a full size and a miniature medal to mark the Sultan's golden jubilee, a commemorative coin and a book.

The Duchess of Cornwall

Camilla was given a handbag by the Sultan of Brunei, as well jubilee medals, a coin and a book.

On an official visit to India, she was given, among other gifts, a USB stick.

In Canada, Camilla was presented with a Trinidanian carnival headdress.

Camilla and the Prince were given two jars of honey, two jars of jelly, a jar of butter, a jar of jam and two wooden chopping boards by the premier of Ontario.

Anne received a large number of presents during her busy working year.

They included pet food products, a horse ornament, a wellington boot stand, spa products, a wooden carving of a chimpanzee, and the unusual gift, sent through the post, of a falcon hood.

She was also given eight brooches, 12 scarves and one pair of shoes - size and make not disclosed.

The Duke of York

Andrew was presented with a book, Safety First: Vintage Posters, from the Royal Society for the Prevention of Accidents.

A trip to his old boarding school Gordonstoun saw him receive photographs of himself playing hockey when he was a pupil.