Doctor did not warn parents of labour complications, inquest hears 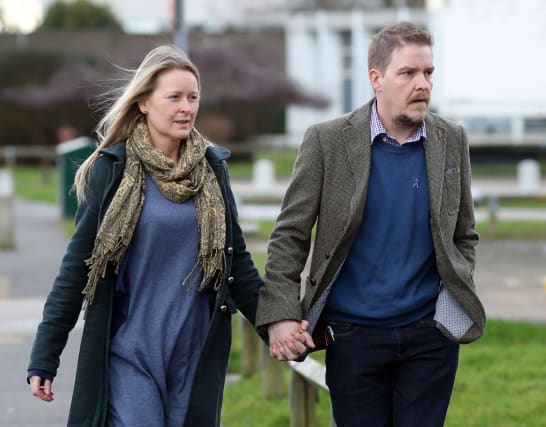 A doctor said he did not warn parents there was a small risk of their baby son dying if suspected complications during labour worsened because he was confident he would be born safely, an inquest heard.

Dr Matthew Jolly told Jo Meeke and Matt Gurney their son was safe and in a good condition around two hours before he was delivered by emergency caesarean section and died the next day.

The couple, of Bosham, West Sussex, had planned for a home birth but went to St Richard's Hospital in Chichester on March 15 last year after Ms Meeke found herself in constant pain.

They described having a "dream pregnancy" but were left holding their son, Puck, in their arms as he died.

The inquest at West Sussex Coroner's Court heard how they arrived at the hospital at around 10.30am but were not seen by a midwife until noon.

Giving evidence in Crawley on Wednesday, Dr Jolly said he first became aware of Ms Meeke being on the ward just before 4.30pm when midwife Helen Fecher raised concerns about her care.

She, other midwives and on duty specialist registrar Doctor Ibrahim Elshazly were monitoring a Cardiotocography (CTG), which checks foetal heartbeat, over fears there could be an abruption - where the placenta separates from the uterus and could deprive the baby of oxygen and cause severe bleeding.

A post mortem found Puck died of hypoxia - a lack of oxygen - brought on by an abruption, the inquest heard.

Dr Jolly, the consultant obstetrician and gynaecologist on duty at the time, said: "I specifically reassured [Mr Gurney] the baby was okay and we would do anything we could to make sure he remained okay.

"I reassured him it was safe to wait and see if the labour would progress [naturally] or not."

He said Ms Meeke, who cried and shook her head as he gave his evidence, "seemed to understand" what was happening but he thought her ability to take in a lot of information was affected by sleep deprivation and the pain she was in.

He said he "very clearly" described the possibility of a small abruption and of it becoming worse but it did not occur to him as a "significant possibility".

Mr Jolly told the court he did not tell them that if there was a severe abruption they would not be able to save the baby's life, and said this decision was based on his experience, training and research.

He said he was confident they would be able to deliver the baby safely, adding: "I said [an abruption] could be life threatening but very quickly qualified that by saying at that time that the baby was in a good condition."

When Coroner Bridget Dolan asked if he thought it was important for a mother to know there was a small risk of something big happening, he said it was a "difficult" question to answer.

He added: "I was trying really hard to do the right thing. I'm trying to make the judgment call about intervening appropriately when required but trying to respect the people I'm looking after."

The couple, who named their son after the character in Shakespeare's A Midsummer Night's Dream, want to raise £65,000 to buy a woodland where grieving families and nurses can "seek solace".