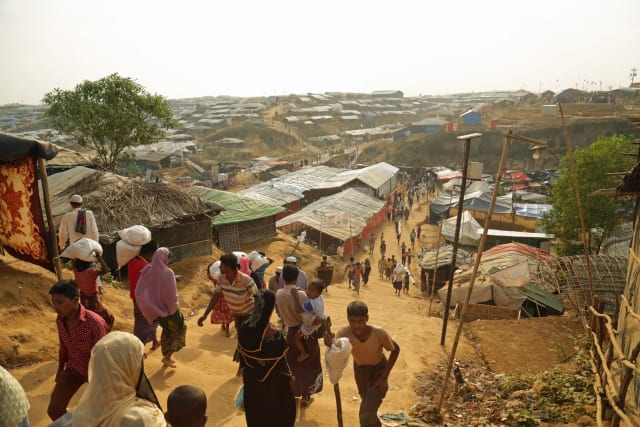 Plans to repatriate around 100,000 Rohingya Muslims to Burma after they fled horrific violence in the state are a "matter of grave concern", a Commons committee has said.

MPs raised fears for the safety of the refugees as they warned rape and sexual violence remain weapons of war used by the Burmese military.

The crisis also fuels the prospect of the area becoming a "powder-keg of radicalisation", according to the International Development Committee.

More than 650,000 Rohingya fled to Bangladesh following a "textbook example of ethnic cleansing" carried out by the Burmese security forces in 2017, MPs said.

Repatriation of around 100,000 people is expected to begin later this month but the committee said it remains unclear whether the Rohingya involved will be volunteers, what their legal status will be and what arrangements will be put in place to protect their safety.

"As it stands, this is a matter of grave concern to us," the report states.

MPs warned that a "vicious cycle of resentment and revenge" is likely after Burmese perpetrators of murder, rape, assault, arson in the conflict appear to have "got away with it".

The Burmese Army continues to use rape as a weapon but the UK government has appeared "reluctant" to commit its full specialist team on sexual violence to help, it found.

Committee chairman Stephen Twigg said: "The UK has 70 experts ready to deploy to Bangladesh to assist with this situation and yet we haven't sent them.

"It is unacceptable that it is taking the UK so long to send any specialist resources on sexual violence to advise on the experiences of the Rohingya in Rakhine State. "

Since 1982, the minority group has been stateless and are considered non-citizens by the Burmese authorities, following a law which denied they were native to the south east Asian country.

But the Arakan Rohingya National Organisation, a representative group based in the UK, claims the Rohingya have lived in Arakan (Rakhine State), western Burma, "from time immemorial" or roughly the 8th century.

Mr Twigg added: "We are going to have to work much harder to protect populations from threats and humanitarian crises.

"For decades, the people in Rakhine State endured discrimination, marginalisation and abuse.

"The Rohingya have paid a heavy price for the lack of consensus amongst the international community on how and when to decide to act effectively. We cannot fail them again."

Kate Allen, Amnesty's UK Director, who is visiting the Rohingya camps in Cox's Bazar, Bangladesh, said: "MPs are right to express concern about the proposed returns of Rohingya to Myanmar (Burma), we share their alarm.

"Amnesty has declared what's happening in Myanmar to be apartheid - both the civilian and military authorities in Myanmar need to dismantle that, before any of its victims can be expected to decide whether to return.

"If Rohingya people do choose to go back to Rakhine State where they faced such appalling discrimination and violence, then Amnesty and other monitors must be allowed access."

A Government spokeswoman said Britain has led the international response, providing "lifesaving" aid to victims, calling on the Burmese military to halt violence and pushing other countries for support.

She added: "As the International Development Secretary has said today and when she visited Bangladesh in November, the conditions for a safe, voluntary and dignified return of Rohingya people to Burma are a long way from being met. We continue to push for returns to be in line with UN principles and for international oversight on both sides of the border."